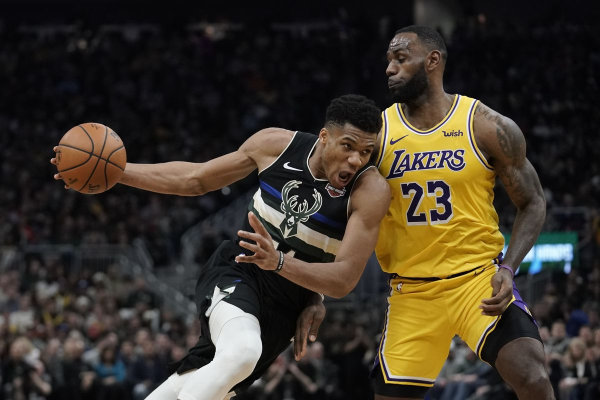 If you tend to wade in NBA waters, whether it be via social media or televised programming, you’ve likely noticed that the LeBron James for MVP sentiment is picking up steam. This late in the season, is it possible for James to upset reigning MVP and current favorite Giannis Antetokounmpo?

While leading his team to the NBA’s best record, Giannis built up a sizeable lead in the MVP race. Thanks to a number of big performances, LeBron is now edging closer to the top of the list as he leads his Lakers to the Western Conference’s best record.

While players like Luka Doncic and James Harden aren’t entirely out of the MVP discussion, it’s all coming down to a two-man race.

So, let’s compare Giannis and LeBron to see who should have the upper hand.

By virtually all accounts, the Lakers are having a great regular season. While many expected the Clippers to be the top dog in the conference, it’s the Lakers who’ve opened up a 5.5-game lead over the Nuggets and their cross-town rivals.

With a record of 46-13, LeBron’s team now looks poised to take the conference’s top seed heading into the playoffs.

Meanwhile, the Bucks are dominating the Eastern Conference standings. With a record of 52-9, no conference team is within nine games of Giannis’ squad.

Both Players Putting Up Big Numbers

Even at an age in which most players enter the twilight of their careers, James is continuing to put up fantastic numbers.

Thus far, LeBron is averaging 25.5 points, 10.6 assists, and 7.8 rebounds per game. However, it’s Anthony Davis who currently leads the team in scoring with 26.4 points per game.

For the Bucks, Giannis leads the way with 29.6 points, 13.8 rebounds, and 5.8 assists per game. So, while LeBron has the advantage in assists, Giannis is tops when it comes to points and rebounds.

However, it’s worth noting that LeBron is tied with Doncic for the league lead with 13 triple-doubles. Giannis has recorded four triple-doubles thus far.

Due to the fact that statistics are often geared toward the offensive end of the court in the NBA, it can difficult to judge a player’s defensive performance. We know that both Giannis and LeBron can be lock-down defenders at their best, but who’s been better this season?

According to the odds, it’s Giannis.

With odds of +300 to win Defensive Player of the Year, Giannis trails only Davis (-175) for the award. Rudy Gobert rounds out the three candidates most likely to receive the accolade.

Meanwhile, LeBron isn’t anywhere to be found on the list of DPOY favorites. So, once again, the edge goes to Giannis.

While the presence of Anthony Davis in Los Angeles will aide LeBron in his search of another NBA title, it likely hurts him when it comes to this season’s MVP race.

In Milwaukee, Giannis is the clear leader. Statistically, the second-best player on the team has been Khris Middleton, who’s averaging 20.9 points and 6.3 rebounds per game.

While LeBron is still considered the leader in Los Angeles, he also has a much better second star in the form of Davis. This year, Davis is putting up 26.4 points, 9.4 rebounds, and 2.5 blocks per game.

Because Giannis is taking the load on his shoulders, the edge goes to the Milwaukee star once more.

One MVP award can change how the community thinks about a player. Multiple MVPs can decide how a player goes down in the history of the sport.

So, it’s no surprise to see fans clamoring to make a case for either Giannis or LeBron.

Currently, Giannis remains the heavy favorite to win this year’s MVP with odds of -950. While LeBron is the closest candidate, he’s still lagging far behind with odds of +1000.

If LeBron is to win the MVP race, he’ll need to continue putting up triple-doubles, lock up the top seed in the Western Conference, and move up the scoring rankings.

Even if LeBron accomplishes all of the above, he may still need Giannis to falter down the stretch. If Giannis has a few more games like Monday’s contest against the Heat, where the Greek Freak put up a season-low 13 points, we may see the odds inch closer.

For now, a LeBron MVP run still appears to be a longshot.