LeBron Unstoppable As No. 1 Lakers Take Down No. 2 Nuggets In OT 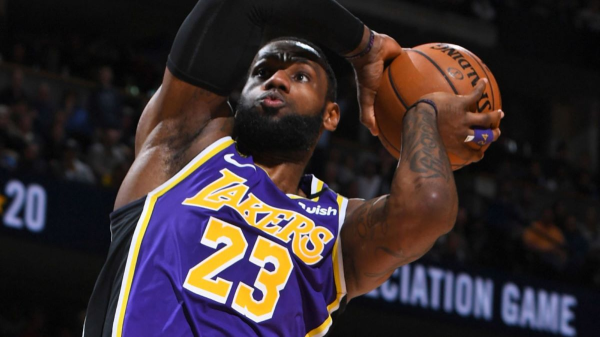 LeBron James and the Lakers have said they aren’t focused on claiming the top seed in the Western Conference, but Los Angeles looked determined to take care of business against the team directly behind it in the standings heading into the All-Star break.

The Lakers needed overtime, late-game heroics from Anthony Davis, and a dominant triple-double from James to overcome the Nuggets in Denver on Wednesday night.

James and Davis were the only Lakers to score more than 14 points, but they had every answer they needed in this contest.

Despite shooting 1-for-7 from three, James ended with 32 points, 14 assists, and 12 rebounds. He was a constant threat at the rim, using his size and quickness to bully defenders in the paint. James was also able to change the game’s momentum with several thunderous dunks.

The King’s performance in Denver earned him his 12th triple-double of the season, now level with Luke Doncic for the most this NBA season.

When these two teams were deadlocked at the conclusion of the fourth quarter, Davis rose to the occasion. On top of his 10 rebounds, Davis scored 33 points, seven of which came in the extra period of play.

With the 120-116 overtime victory, the 41-12 Lakers now head into the All-Star break with a healthy lead atop the Western Conference standings.

Who Will Threaten Lakers In Western Conference?

Even after building a roster with James and Davis at the top, the Lakers have outperformed the expectations many people had for this team.

But despite their accomplishments and place atop the standings, it’s also clear that the Lakers have some legitimate threats to their championship aspirations.

Let’s start with Denver, which is 38-17 after falling to Los Angeles Wednesday night. Even on an evening in which James had a monstrous triple-double and Davis put up 33 points, the Lakers needed overtime to best a well-rounded Nuggets team.

Then there’s the other Los Angeles squad, which currently sits third in the conference and 4.5 games back of the Lakers with a record of 37-17. The Clippers have chosen to utilize load management to make sure the likes of Kawhi Leonard and Paul George are healthy and rested for the most important times of the year.

After the Nuggets and Clippers, is there any other threat to the top teams? The 36-18 Jazz have looked strong, but not many expect this team to be a dominant force in the playoffs. The 34-20 Rockets have the scoring ability of James Harden, but they’ve looked like a mess for stretches of the season.

Unless we see real growth from another Western Conference team, the Lakers can focus on the Nuggets and Clippers as they strive for an NBA Finals appearance.

Virtual Lock For A Los Angeles Team To Win The West

So far, we’ve discussed the three teams with a chance to claim the Western Conference title. According to the odds, there are only two contenders.

While the Nuggets have done more than enough to show that they’re a legitimate threat to the two Los Angeles clubs, their +1000 odds of winning the conference place them in fifth. They even trail the Rockets (+800) and Jazz (+950).

Yet it may not matter what sort of order follows the two Los Angeles teams, as the two favorites are miles ahead of the competition in the world of betting.

Both the Lakers and Clippers currently sit on odds of +180 to win the Western Conference. And with odds of +300 to win the NBA Finals, they both trail only the Bucks (+270).