Lakers Without Kuzma As Season Approaches 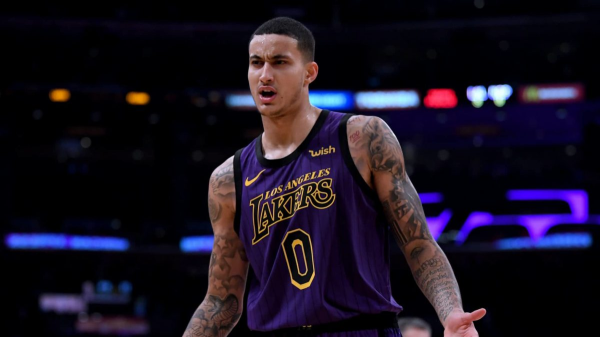 Twitter’s Favorite Laker Has a Foot Injury. What does it mean going forward?

In late September, while everyone is concerned about football and the like, I think the last thing people are going to be worried about is what’s going to happen with the Los Angeles Lakers, unless of course, you’re a diehard Lakers fan who doesn’t care about the Chargers or Rams. Then, sure, I guess we can talk about the Lakers, but most importantly, Kyle Kuzma, who happens to be the MVP of NBA Twitter.

With scathing, acerbic responses all the time, he is undoubtedly one of the best follows for those on Twitter looking to be entertained and find something worth following. In the long run, there is no doubt that they are similarly well-adjusted for these kinds of follows, as they will often become much more competitive and worth following, but with the Lakers, there are some things to keep in mind with Kuzma’s foot injury suffered while training with Team USA this summer.

No, Kuzma is not the most important player on the squad, but as one of their brightest young talents, he can certainly play an integral supporting role going forward and when the season progresses with the now most-favored team in the league, next to the Los Angeles Clippers.

So, if you’re looking for a really exciting read, look elsewhere, because frankly, there isn’t much here. Yes, Kuzma was injured, and as it stands, the injury was just ruled as a stress fracture. That said, there isn’t much more that could be seen at the time of the injury, but there will be an MRI to see if there is any underlying damage to the surrounding tissues and ligaments, aside from just seeing an x-ray of the bones.

So, let’s see if we can handicap how such an injury would affect Kuzma going forward, and frankly, the answer is the following: Not a whole lot unless an MRI bears out something else. This is where it’s important to realize that unless something really dramatic changes or is affected, we are not really going to learn a whole lot more than what we just saw. This is where it’s critically important to understand that if these things happen in such a context, then it is incumbent upon everyone else to really try and make things dynamic coming off of the bench and otherwise.

The fact is, as the Lakers jettisoned many of their critically important supplementary players to the Pelicans in the Anthony Davis trade, Kuzma is one of the few young assets that they still have, making his presence on the team really important going forward. People need to keep in mind that he is a very important player for the squad, and until they can change things up, then it’s going to remain consistently in the same situation.

By keeping everything in a row, then it’s undoubtedly going to be positive for all parties involved. This is just one thing to consider, and until more can be determined, that is ultimately going to be the end of the scenario for the foreseeable future, all parties included.

So moving on, definitely expect Kuzma to be one of the more important pieces until something else changes.