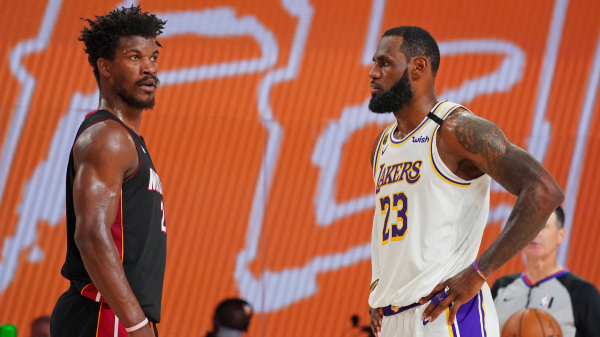 If you would have told me before Game 3 that Kyle Kuzma and Markieff Morris combined for 38-points off the bench I would have assumed the Lakers won in commanding fashion. However, that was not the case

The Heat stole Game 3 of the NBA Finals 115-104 over the Los Angeles Lakers behind the heroic 40-point triple-double performance from Jimmy Butler. With Bam Adebayo and Goran Dragic out for the second straight game in a row, Butler put the team on his back joining Lebron James and Jerry West as the only three NBA players in history with a 40-point triple-double in the NBA Finals

Aside from Butler’s stellar performance, one of the key storylines was the lack of offensive production from Anthony Davis. Davis, who found himself in foul trouble early on in the contest, was held to only 15-points in 33 minutes of action.

Butler let Lebron and company know on many occasions that the Heat were not going anywhere, with his play and his words. With the time winding down in the fourth quarter, Butler was heard saying “You guys are in trouble” in the direction of Lebron, after Lebron had exchanged those same words to Butler in the first quarter. It seems as if that heated exchange early on in the game could have fueled Butler’s 40-point performance.

It will be intriguing to see how a motivated Lebron led Lakers team responds in Game 4, after the Heat showed signs of life following so much adversity thus far during this NBA Finals series.

In each of the three previous playoff series for the Lakers, they have seemed to take at least one game off where the team lacked a sense of urgency. It happened in Game 1 against the Portland Trail Blazers, in Game 1 against the Houston Rockets, and Game 3 against the Denver Nuggets. The Lakers went on to win every game following a loss in those series. If the pattern holds up, Game 3 was that game for the Lakers. In games following a loss these playoffs, the Lakers have gone on to win the next game by an average margin of just over 12-points. I see no reason for that to change here against the depleted Heat squad.

According to FanDuel, the Lakers are favored by 7.5 points (-105) and I expect them to cover this spread at ease. In Game 3, Lebron James was shown walking off of the court with ten seconds still left on the clock showing clear frustration at the lackluster performance by the team. There is no doubt in my mind that Lebron will have the team ready to go and locked in heading into Game 4.

I would also suggest taking the Lakers first half -4.5 (-108) as I expect this team to come out of the gate swinging with a newfound sense of urgency. Look for Anthony Davis to be aggressive early on the offensive end, with Danny Green improving from beyond the arc after a poor Game 3 shooting performance.

I briefly mentioned above the lack of production from Anthony Davis in Game 3. This provides the perfect scenario for bettors to capitalize on a bounce-back performance by him. This is why I will be hammering the over on Anthony Davis’s total number of points at 29.5 (-118).

However, it doesn’t stop there. Davis has arguably been the best player on the floor these entire playoffs, as he has been virtually unstoppable when he isn’t facing foul trouble. If Adebayo is unable to go in Game 4, the only defender the Heat have that can somewhat hinder Davis’s performance, then I have another prop I advise you all to take a look at. I firmly believe that Anthony Davis will score the most points in the contest at (+100).

Another player that struggled from the field was Miami Heat guard Duncan Robinson. Robinson, known for his stellar three-point shooting, was sloppy from behind the arc only connecting on 3 of 10. Even with this poor shooting performance, Robinson was still able to manage 13-points in the Heat win. I expect Robinson to shoot the ball at a higher clip in Game 4, which is why I’m hammering over 11.5 points (-106) for the young star out of Michigan.

My final score prediction for Game 4 of the NBA Finals is 112-96, with the Lakers on top.