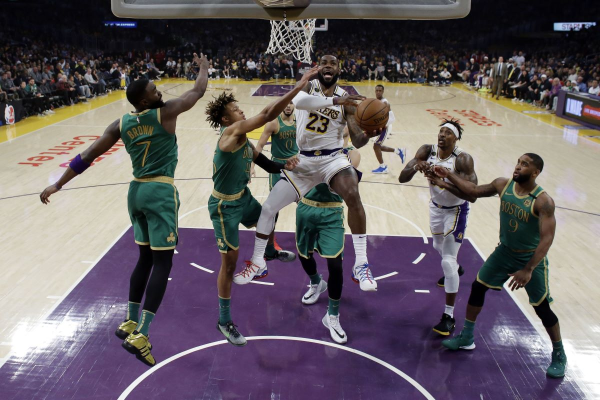 With a shimmy, a shake, and an unblockable fade-away shot, LeBron James put the Lakers ahead of the Celtics by a point with just 30 seconds remaining. That go-ahead bucket would help the Lakers seal the 114-112 victory and extend their lead in the Western Conference.

The NBA’s premier matchup on Sunday brought Boston into Los Angeles, where the two championship hopefuls needed every bit of the 48 minutes to decide a winner.

This one felt like a classic Celtics-Lakers rivalry game, as some hard fouls and heavy contact preceded a nervy ending.

While the Lakers would finish the game on top, it wasn’t all smooth sailing. Los Angeles experienced a scare when James crashed to the floor after colliding with Daniel Thies, causing the basketball world to hold its collective breath for several moments.

“I didn’t have much breath left,” James said. “Got the wind knocked out of me; been a while since I felt that happen.”

The incident looked worse than the fallout actually was, which meant James was on the floor to collect an in-bound pass, back down Jaylen Brown, and hit his fade-away jumper to give his team a lead it wouldn’t relinquish.

James finished the game on the precipice of another triple-double by putting up 29 points, nine assists, and eight rebounds. Anthony Davis led the Lakers with 32 points and 13 rebounds. Despite getting 41 points from Jayson Tatum, the Celtics didn’t have enough to get the victory.

Lakers’ Path to the Finals

It’s certainly possible that Sunday night’s contest was a preview of this year’s NBA Finals. After all, the Lakers lead the Western Conference, and the Celtics are third in the Eastern Conference. Let’s start with L.A.

That’s the group of teams Los Angeles will have to get through if they’ll reach the NBA Finals.

Many expect the toughest out of the bunch to be the Clippers. Although the Lakers have opened up a significant lead in the Western Conference, the Clippers have rested players and acquired talent with one eye securely fixed on the playoffs.

The Clippers have won the arms race leading up to the trade deadline by bringing in guys like Marcus Morris Sr. from New York and Reggie Jackson, who signed for the team after buying out his contract with Detroit.

However, the Lakers will still feel like they have enough between James and Davis, with role players like Kyle Kuzma, Dwight Howard, and Danny Green ready to contribute, as well as Sunday night’s addition of Markieff Morris.

Thanks to their regular-season prowess, the Lakers have earned themselves the best odds to win the Western Conference at +225. The Clippers remain very close behind with odds of +317. At +1433, the Rockets are the closest team to the two favorites.

Celtics Face the Tougher Road to the Finals

While the Lakers will face plenty of competition in the Western Conference playoffs, the Celtics have the tougher path to the NBA Finals for one very simple reason: the Bucks stand in the way.

With a record of 29-17, Boston has enjoyed a strong season to this point. Yet the Celtics sit third in the conference and trail the top-seeded Bucks by nine games. Boston also trails 42-15 Toronto.

But according to the odds, it’s a one-team affair. At this point, Milwaukee is a heavy favorite to represent the Eastern Conference in the NBA Finals with odds of +267 to take care of business in the conference playoffs.

Yet Boston can still eye a trip to the NBA Finals, as they’re currently tied for the second-best odds to win the Eastern Conference with Philadelphia at +1533.

So, while it would take a big upset for Boston to make it through the conference, there’s certainly a chance that Sunday night’s contest between the Lakers and Celtics was a preview of the NBA Finals.