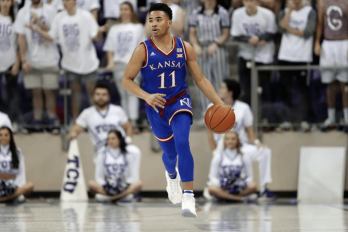 There is still a lot to be decided in the Big 12 Conference race, but Saturday might play a huge role in figuring things out. Texas Tech hosts Kansas on Saturday evening in a battle of second-place teams. Both the Red Raiders and Jayhawks are 9-4 in conference play and trail the Kansas State Wildcats by just one game in the standings. The loser of this game is likely to be eliminated from Big 12 title contention.

Texas Tech hasn’t lost a Big 12 conference game since a 79-63 loss at Kansas earlier this month. The Red Raiders have rattled off four straight conference wins, and have fun their record to 21-5 overall. Texas Tech is the 14th ranked team in the country at this point. Kansas has won three straight games to get back into the Big 12 race. The Jayhawks are the 12th ranked team in the country with a 20-6 record. Texas Tech is a 6.0 point favorite in this game.

The Jayhawks looked like their season was unraveling just a few weeks ago, but they appear to have things figured out. Kansas is still without two of their biggest stars, Udoka Azubuike and Lagerald Vick, but head coach Bill Self has found other players to step up. The Jayhawks are averaging 76.9 points per game this season while giving up 69.8 points per contest. This isn’t one of the most dominant teams in the country like in season’s past, but the Jayhawks are still extremely hard to beat.

The one constant for the Jayhawks this season has been forward Dedric Lawson. Lawson leads the Jayhawks with 19.2 points and 10.3 rebounds per game this season and will be on the short list of All-American candidates at the end of the season. Freshman guard Devon Dotson has been improving with each game and is pouring in more than 12 points per game this season. Head coach Bill Self is being forced to rely on freshmen at this point of this season, but the freshmen have been stepping up of late.

The Red Raiders have just three players averaging double-figures on offense this season, and they are constantly looking for more production. Sophomore guard Jarrett Culver has been the offensive star for Texas Tech this season. Culver is averaging 17.7 points and 3.7 assists per game and is climbing up the NBA Draft ranks. Guards Davide Moretti and Matt Mooney are both shooting better than 37 percent from deep and will need to make some shots in this game.

Kansas overwhelmed Texas Tech in the first meeting of the season, but the Jayhawks had more weapons in that game. The Red Raiders have suffered just one home loss all season long, and their defense will be harassing in this game. Kansas has dominated the Big 12 for the last decade, but their reign is coming to an end this season. Bet the Texas Tech Red Raiders -6.0 over the Kansas Jayhawks on Saturday night.