Irving Out For Season; Brooklyn Out Of Playoff Race? 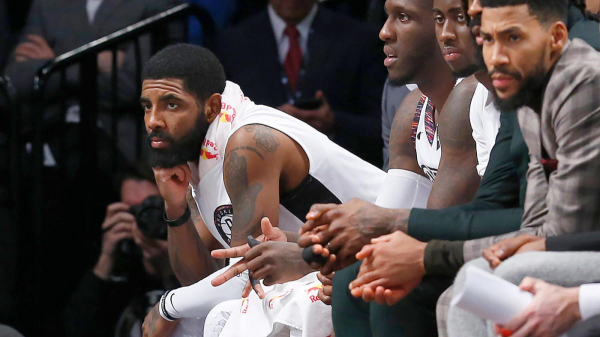 Of all the moves in a crazy NBA offseason, many considered Brooklyn to be the overall winners. It was just about a perfect situation, after all.

By signing both Kevin Durant and Kyrie Irving, the Nets would bring in a player some consider to be the best in the world, and they’d get to see one of the most talented guards gel with their young core while Durant recovered throughout this season.

Now, it appears Brooklyn may not have anything to play for this year.

After playing just 20 games for the Nets so far this season, Irving is being shut down for the rest of the year as he undergoes shoulder surgery.

Speaking on the idea of getting at least one of the Nets’ stars acclimated with the rest of the roster, coach Kenny Atkinson said, “We’ll have to start fresh next season and figure it out quickly. But that is the disappointing part.”

Because of Irving’s injury history, the Nets are focused on getting the guard right for the 2020-21 season, when he can pair his talents with that of Durant.

Irving’s shoulder injury isn’t the first time he’s faced health issues that have caused his season to end prematurely. In fact, Irving has now missed at least 15 games in six of his nine seasons in the NBA.

In the 2015 NBA Finals, Irving suffered a fracture to his left kneecap in Game 1, causing him to miss the remainder of the series.

The same knee was an issue once again in the 2017-18 season when it caused Irving to miss the end of the regular season and playoffs in his first year in Boston.

Irving’s injury history dates back to Duke, when a toe injury forced him to miss all but 11 games of his only season as a Blue Devil.

Since then, Irving has dealt with a scratched cornea, a facial fracture, a fractured finger, a broken hand, a concussion, multiple knees issues, and now a shoulder problem.

This season, Irving missed the first two months due to a right shoulder impingement. After just two weeks on the floor with his teammates, a knee sprain caused him to miss another five games.

Now, the Nets have decided it’s the right time for Irving to undergo shoulder surgery, ending his season.

Are the Nets Finished?

The Nets weren’t exactly poised to make a deep postseason run before Irving’s injury, but they could now struggle to keep hold of a playoff spot.

Currently, the 25-29 Nets own the seventh seed in the Eastern Conference and are 21.5 games back of the first-place Bucks. And Brooklyn is far closer to eighth-seeded Orlando than they are to sixth-seeded Indiana.

There’s a sharp dropoff between the 32-23 Pacers, who sit 15 games back of the Bucks, and the Nets.

That’s the good news – the Nets are used to playing without Irving, and have players like Spencer Dinwiddie who’s been able to shine without a superstar to overshadow him. In fact, Brooklyn may be excited to see what they can do with their young core if they can back into the playoffs.

Either way, the Nets are likely doing the right thing by sitting Irving. With odds of +4500 to win the Eastern Conference, Brooklyn feels a world away from Milwaukee (-155), Philadelphia (+700), and Miami (+750).