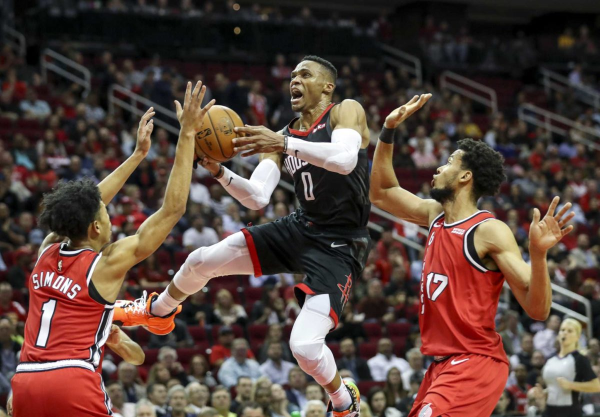 The Houston Rockets visit the Denver Nuggets on Wednesday night in what should be an exciting matchup between two first-place teams. Each team is currently leading their division. The Rockets are coming in on an eight-game winning streak, and James Harden and Russell Westbrook seem to be gelling nicely. Nikola Jokic has shown he is a legit star in this league for the Nuggets.

The Rockets are coming off a 132-108 victory over the struggling Portland Trail Blazers. As you would expect, Westbrook and Harden led the way, as Westbrook had a triple-double with 28 points, and Harden scored 36. The 36 points by Harden is actually below his season average, as crazy as that may sound. He leads the NBA by averaging a career-high 39.2 points this season.

The Nuggets are coming off a win of their own over the Memphis Grizzlies 131-114. Jamal Murray scored a season-high 39 points, rebounding from a 1-for-11 shooting night against the Nets. Murray added eight assists with no turnovers on the night, while connecting on 14 of 24 shots, including 7 of 12 from 3-point range. This was Denver’s sixth win in its last seven games.

The Rockets are currently the top-ranked offense in the NBA. A few people questioned how Harden and Westbrook would play together, and whether they would share the ball. So far so good, as Westbrook is showing he doesn’t mind playing second fiddle, and he is still getting plenty of shots.

You are never going to see Houston at the top of the defensive rankings, but this group has been good enough. They allow 113.7 points per game, but average 5.6 blocks and 8.1 steals per game.

Denver takes a much different strategy than Houston. They are not led by two superstars but rather win as a group. No one on the team averages over 20 points a game. You don’t know who is going to beat you on a given night.

Denver has played at the slowest tempo in the league thus far. They are going to want to keep this game at their pace and not get into a track meet with Houston, which can score in bunches.

Houston has been on fire, winning eight in a row and scoring in bunches. They are also yet to lose a game to anyone in the Western Conference. I think this total is low as well, as the teams combine for over 226 points per game, and in a matchup of possible title contenders, I think the scoring goes up a notch. The Nuggets have a nice record, but they are by no means playing their best basketball. I like Houston to cover and maybe even win the game straight up, but let’s be safe and take the points.