Game 4 preview and picks for Nuggets vs Jazz 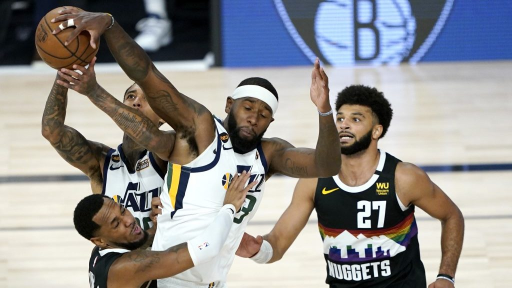 One of the most interesting series in the NBA has surprisingly been between the Utah Jazz and Denver Nuggets. Basketball fans have been treated to some amazing performances so far. Players have been scoring at an epic rate and the lack of defense has led to some high scoring affairs.

Both teams have great players on the roster. Utah is led by Donovan Mitchell and Rudy Gobert. Mitchell is an assassin on the court who can score points at will. In Game 1, Mitchell put up 57 points with 9 rebounds and 7 assists. Gobert is a great presence down low. In Game 3 he grabbed 14 rebounds on top of scoring 24 points.

On the other side of the ball the Denver Nuggets have Jamal Murray and Nikola Jokic. Murray also had a scoring outburst in Game 1 scoring 36 points and having 9 assists as well. Jokic had quite the Game 1 as well scoring 29 points.

Game 3 wasn’t the best for the Nuggets.

They were defeated 124-87 and are now down in the series. Both Murray and Jokic struggled combining for less than 30 points between the two stars. If Denver wants to tie things up they will need better performances from those two. Mike Conley Jr was the leading scorer for Utah with 27 points.

In today’s game, the Jazz are favored by 3 points.

After such a dismal performance in Game 3 bettors should expect the Nuggets to bounce back. Even if they lose, it should be a close game. The Jazz have also struggled against the spread. They have a 7-13 record in their last 20 games against the spread.

The Nuggets can’t afford to lose.

If they do they will be down 3-1 and the series will basically be over. They need to prove a point and show that they are not done yet. If the Nuggets do go down 3-1, in Game 5 you will want to go with the Jazz.

Also the line for the total is set at 215. 2 out of 3 games so far have gone over. Expect a good performance from Jamal Murray and Jokic so it’s likely that the over is reached once again. If you want to get risky and double down, betting the first half over wouldn’t be a bad idea as well. Most sportsbooks currently has the first half line at 110.5. It’s likely that these teams continue to come out firing and that the defense is minimal at best.

Also the stats back up the game going over. In their last 10 games the total has gone over for Denver. Betting the over also happens to be the best way to watch a basketball game. It’s much better to root for points than to root for defense.

There is also some money to be made if you are confident that the Nuggets will bounce back. An alternate line of -3 for the Nuggets gives you odds of +170.

No matter what, Game 4 will be fun to watch.

Jamal Murray and Donovan Mitchell could have another amazing battle and show how they are some of the best young guards in the league. Also Jokic will be looking to contain Rudy Gobert which hasn’t been the easiest thing to do as of late.

So no matter who you are rooting for or who you bet on, Sunday’s late night matchup will have you on the edge of your seat.