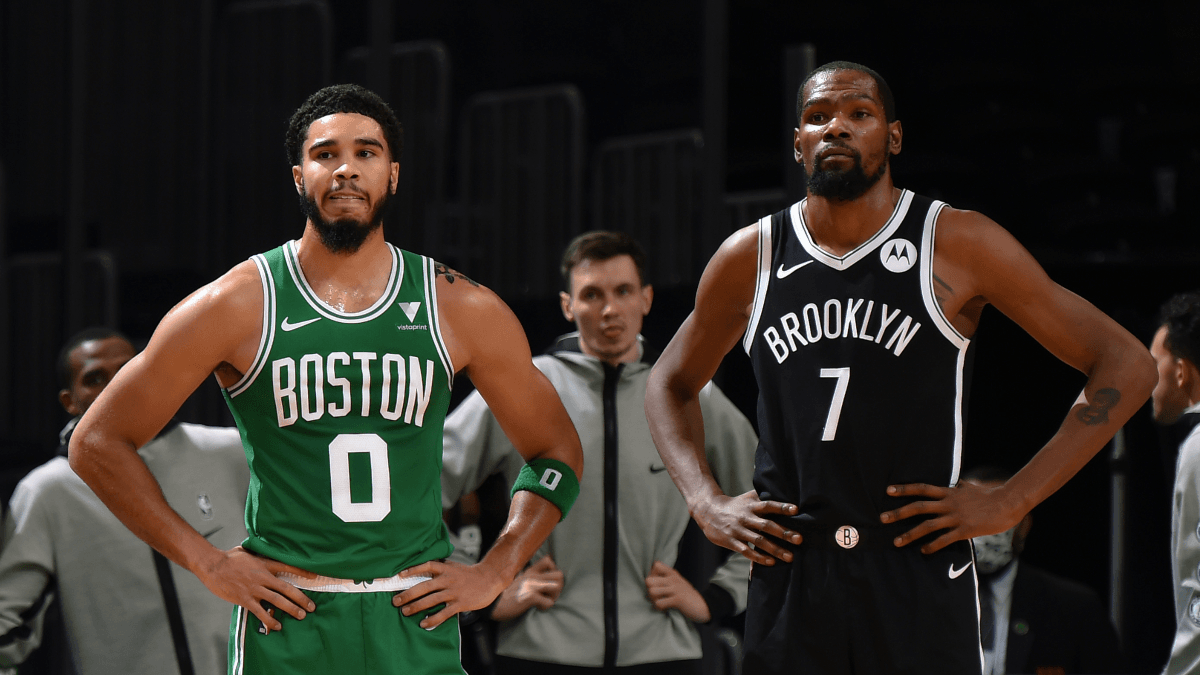 Will there be any suspense in the Brooklyn Nets vs Boston Celtics series, or will the NBA championship favorites stroll to a series win?

Away we go with the Brooklyn Nets in their first playoff series with their big three of James Harden, Kevin Durant, and Kyrie Irving. It is well documented how little this group played together during the season, but if they can stay healthy for the next two months, the odds are they are going to have a lot of success.

It will be interesting to see how this group handles adversity, but they might not experience much of that in this series against a depleted Boston team. Brooklyn is one of the best offensive teams that we have seen with those three stars leading the way. Will they play enough defense to win it all though?

Boston finished the regular season 7th in the Eastern Conference and held that spot by beating Washington in the play-in tournament. Jayson Tatum was a monster in that game and they are going to need him to keep that up if they are going to challenge Brooklyn while missing Jaylen Brown.

Boston’s regular-season was uneven, to say the least. They had trouble staying healthy in the backcourt and the moves they made at the deadline did not provide much of a bump. Tatum is a star, but he is not yet at the level of the three guys the Nets can throw out there. Brad Stevens is one of the best coaches in the NBA, and this is a series where he is going to have to show it.

Nets vs Celtics odds are via FanDuel Sportsbook as of Saturday, May 22 at 5:30 am ET.

Even with a healthy Brown, it was going to be tough for the Celtics to compete in this series. It is no surprise that Brooklyn is such an overwhelming favorite without him available for Boston.

The series price is a nonstarter unless you want to take a flyer on the Celtics. Maybe one of the big three gets hurt, but beyond that, it does not look like there is much value betting on Boston. I do like the idea of stacking Brooklyn to win 4-0 or 4-1 more than taking them -2.5 games. The payoffs can be a lot better, and the sweep looks like a very real possibility. Brooklyn might not win it all because I am not sure they can stay healthy for a full playoff run, but in this first series of the playoffs, we should be able to take full advantage of their excellence.

Health – Of course, this is a factor for all teams but especially so for Brooklyn. This team is loaded, but all of their stars have had durability issues this season. The Nets have proven they can win with nearly every combination of Harden, Irving, and Durant, but I do think if they lose any of them that it could turn that game and maybe the next. Sometimes that is all an underdog needs, just a little window to sneak through.

Defense – It is a very real possibility that Brooklyn runs through the playoffs and every game it wins it does so by double digits. I don’t think they would win every game, but I would not be surprised if when they do, they win big. The question mark for this team is are they going to play enough defense. Their offensive abilities are almost unmatched, but when they don’t score they have a hard time winning in other ways. The Nets are 1-3 SU when they score less than 100 points this season. Can the defense be good enough to cover a non-shooting game? That is what Boston is going to try to do to them.

Coaching – The team has had a lot of success this season. Steve Nash is a first-year coach though, and there are not a lot of those that take their teams very far. Nick Nurse did it a couple of years ago with Toronto, but he had been coaching for years. That is not the case with Nash. In games where the Nets are way up it might not be much of a factor, but in close games coaching does matter, especially for a team with egos like this one. There is only one ball. Until we know how Nash does it is hard to not give an advantage to Boston on the sidelines.

Kemba Walker – Even before Brown went down for the season the Celtics have been trying to figure out how to get more out of Kemba Walker. He has seen his numbers rise a little bit lately, but for them to have a chance in this series we need to see vintage UConn Kemba Walker, where it seems like he has the ball in his hands all game long. He should be able to do a lot of damage against Kyrie Irving and will need to for Boston to have a chance. I really want to see it too.

Defense – There is no way that Boston can keep up with the Nets shot for shot. Tatum might be able to match one of their big three, but even with Walker and Evan Fournier playing well they still need to play some great defense. That means that Marcus Smart and Robert Williams III might be just as important as Tatum and Walker. Those two need to be able to elevate their games and not foul. During the regular season, the Celtics defense was just above average and not good in three losses to Brooklyn. It will be a quick exit if they are not better in this series.

Attacking The Stars – For Boston to have a chance they have to go right at Brooklyn, per the above, trading baskets with them is not going to work. Durant can be disruptive with his length sometimes, but nobody of that threesome is a positive defender. Boston needs to tire these guys out and put them in foul trouble. When you have just a single star it can be easy to try and hide them on defense, but with three on the court, Brooklyn can’t really do that. The only chance that Boston has is to reduce the efficiency of Brooklyn and you can’t do that with defense alone. You need to make those guys work at both ends.