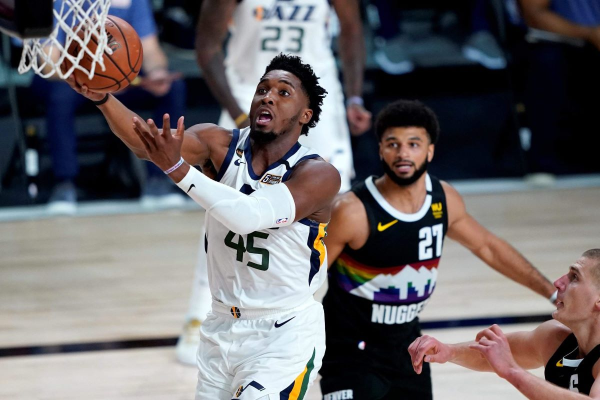 The NBA is currently in a state of flux after the entire slate of games was canceled for Wednesday night. The cancelations came after the Milwaukee Bucks refused to take the court in protest of the recent shooting and social unrest in Kenosha, Wisc. After the Bucks made the decision early, the rest of the NBA teams scheduled to play Wednesday followed suit.

If there are games Thursday, one of the more intriguing ones will feature the Denver Nuggets (2-3) trying to save their season again against the Utah Jazz (3-2). A win would send the Jazz on while a loss would send this series to a Game 7. Tipoff for this one is currently scheduled for 4 pm ET from the Advent Health Arena.

In Game 5, the Nuggets were able to salvage their season with a 117-107 win. In the victory, guard Jamal Murray led Denver with 42 points, eight rebounds and eight assists. Nikola Jokic also chipped in 31 points, six rebounds and four assists.

In the loss, Donovan Mitchell led the way for the Jazz with 30 points, two rebounds and five assists. Mike Conley Jr. and Jordan Clarkson also chipped in 17 points each.

On the defensive end, Utah once again holds a slight advantage. They rank 10th in points allowed per game at 109.2, while the Nuggets come in 13th, allowing 110 per game.

Nuggets Trying To Hold On

Despite all odds, the Nuggets are just trying to hold on. They hope that a strong Game 6 will allow them to push it to the brink in a Game 7.

Jazz Looking To Close It Out

While the Nuggets are trying to hold on Thursday, the Jazz are trying to close this series out. After dropping the opener, they had won three in a row against Denver but will try to end it before the Nuggets get too much momentum.

The Jazz will look to their superstar, guard Donovan Mitchell, to lead the way. During this series, he has averaged 37.6 points, four rebounds and 5.6 assists per game.

Getting these contributions is huge for the Jazz, who many thought would struggle with Bojan Bogdanovic being put on the shelf before the NBA restart commenced.

Taking The Jazz To Finish It Off

It would not shock me if this one comes down to the wire, but coming into this series, I thought that the depth of the Jazz would outplay the Nuggets.

While Jamal Murray and Nikola Jokic are solid, Donovan Mitchell has gotten more support from the rest of his team. In fact, the Jazz have been more successful when the scoring is spaced out and not all on Mitchell. For my money, I like the Jazz to win and close this series out.