Clippers To Add Depth With Jackson 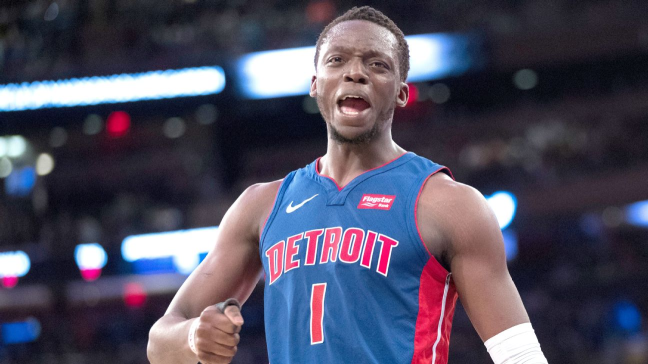 One of the deepest teams in the NBA will get a little deeper once Reggie Jackson joins the Clippers’ ranks after clearing waivers. Jackson recently agreed to a contract buyout with the Detroit Pistons, making him available to a contender.

According to reports, Jackson had been set on becoming a Clipper if the buyout was agreed upon. Despite interest from several other teams in the race for this season’s NBA title, Jackson will now bolster the Los Angeles roster.

Part of the reason why Jackson has been focused on the Clippers is likely Doc Rivers’ eagerness to utilize the 29-year-old guard’s playmaking ability in the team’s second unit. While Kawhi Leonard and Paul George make the Clippers a championship contender, Jackson’s scoring ability off the bench could be the final piece of the NBA Finals puzzle.

On Tuesday morning, Jackson’s agent completed the buyout terms with the player on the final year of a five-year, $80 million contract. Later that day, Jackson’s representation and the Clippers agreed to terms.

If Jackson is now able to showcase his talents on a loaded Clippers roster and help this team win an NBA title, he’ll only improve his value heading into a summer in which he’s expected to be one of the most sought-after guards in free agency.

According to reports, Jackson has wanted to play with longtime friend and Clippers star Paul George, which could have played a major role in pushing the Clippers to the top of Jackson’s wish list.

Now that the move appears to be all but done, what does Jackson bring to a Los Angeles team ready to compete for a title?

In his nine seasons with the Pistons and Thunder, Jackson has averaged 12.9 points, 4.4 assists, and three rebounds per game. After starting this year with a back injury, Jackson is averaging 14.9 points and 5.1 assists in the 14 games he’s played this season.

In addition to his statistical contributions, Jackson also brings a tenacity that makes him fun to play with and frustrating to play against.

The guard should also be comfortable in his backup role after playing an important part on Thunder teams in which he backed up Russell Westbrook and James Harden. Now, he’ll reinforce a starting lineup that features Leonard, George, Patrick Beverly, and others.

Our first chance to see Jackson in his new role could come during the Clippers’ next game, which comes against Sacramento on Saturday.

That’s an appealing tradeoff for the veteran guard. But Jackson’s move is more than just a nice change of team for him – it could go a long way in giving the Clippers an edge at the end of the season.

In a Western Conference race that remains likely to pit the two Los Angeles clubs against one another, the Clippers have won the mid-season arms race by landing both Jackson and Marcus Morris Sr.

That could easily be the difference in a Western Conference that the Lakers and Clippers are both favored to win with odds of +170. No other team is even close, with the +700 Rockets being the nearest team to the two Los Angeles squads.

Once again tied with the Lakers, the +300 Clippers trail only the +240 Bucks when it comes to odds of winning the NBA Finals.