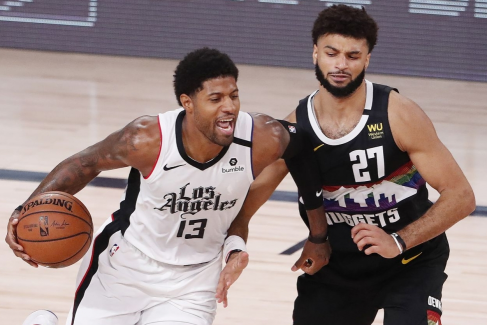 The Los Angeles Clippers lead the Denver Nuggets 2-1 in the Western Conference semifinals heading into Game 4 Wednesday night at 9 p.m. EST. After dropping Game 2, L.A. bounced back to win Game 3, 113-107, regaining control of the series in Orlando.

What’s going right for the Clippers

You’ve probably heard Mark Jackson say it on ESPN broadcasts recently: The NBA is a make-or-miss league. Every team goes about finding its shots a little bit differently, but at the end of the day, the team that makes more usually wins, especially in a three-point-happy league.

In each of L.A.’s two wins over Denver, the Clippers shot a higher percentage from 3-point range. Denver has, at times, been lax defensively in the bubble. Leaving shooters like Kawhi Leonard, Paul George and Lou Williams open beyond the arc can bite the Nuggets in the butt if the shots go in.

Speaking of makes and misses, the Clippers have recorded more blocks than the Nuggets in each of their two wins, but in Denver’s win, the Nuggets outblocked L.A. 7-4. Blocks can be a fluky stat, but they sometimes tell a lot of the story – rim protection can be a great equalizer if one team outshoots the other from 3. If the Clippers continue to make more 3s while also defending the rim better than Denver, it’ll be tough for the Nuggets to get back in the series.

What’s going right for the Nuggets

Denver is forcing turnovers. In two of the three games, L.A. has turned the ball over more than Denver, while on the other occasion the teams both turned the ball over 15 times. One way to make up for being a worse-shooting team is to put up more shots than your opponent and capitalizing on mistakes – by consistently winning the turnover battle, Denver gives itself a chance to do just that

The issue for Denver in regards to those turnovers is turning them into points – the Clippers have recorded more points off turnovers in all three games of the series despite never taking the ball away more. Some of that comes down to location of turnovers, but more of it comes down to shot-making.

Denver shouldn’t be inherently bad at making shots: Jamal Murray was cooking last round, Nikola Jokic can score from anywhere, Michael Porter Jr. is a dynamo off the bench and the Nuggets surround them with solid spot-up shooters. The shots just haven’t fallen so far this series, making the turnover advantage less advantageous so far.

Everyone knows how talented the Clippers are, but after a Game 1 blowout, Denver came back to win Game 2 and even the series. The bubble has eliminated home-court advantage and provided teams easier opportunities to maximize energy and seize momentum back.

Denver’s due for a hotter shooting night. The turnover trend should stay consistent, and despite solid defense of the Clippers, more wing shots will fall for the Nuggets. That should be enough to claim a Game 4 victory and even the series up once again.

Let’s start with the game outcome – both DK and FD have favored the Clippers by more than seven points despite Game 3 being decided by six and the Nuggets winning Game 2. Maybe there’s a talent gap, but more often than not in this series, it hasn’t shown up.

The long odds for the Nuggets make the Denver moneyline a solid play. There are enough negative trends due to reverse that the Nuggets should outperform their odds. It’s rare this late in the NBA playoffs to find such long odds, and they’re probably a little too long in this case.

Both DK and FD also list this game’s over/under total at 220. If we’re betting on the Nuggets finding their shooting touch once again, it’s worth betting on the over. More made shots equal more points.

Neither site has released their Thursday player props yet, but we can already lock one in: The over on Jamal Murray’s points total. This is right around the time when Murray put the Nuggets on his back in the last series. There’s some risk in counting on a player being hounded by good defenders to score more than 30 points, but Murray too will see some positive regression in his shooting. If he can get on a hot spurt like he did in the second half a few times against the Jazz, Murray can breeze by whatever point over/under is set for him, no problem.

If you’re looking for one positive Clippers bet, go with the over on Ivica Zubac’s scoring, assuming the over/under total is in single digits. Zubac should reach 10 or more points as the Nuggets focus their energies on the offensive end, with Zubac taking advantage of Jokic’s poor defense or that of undersized power forwards.