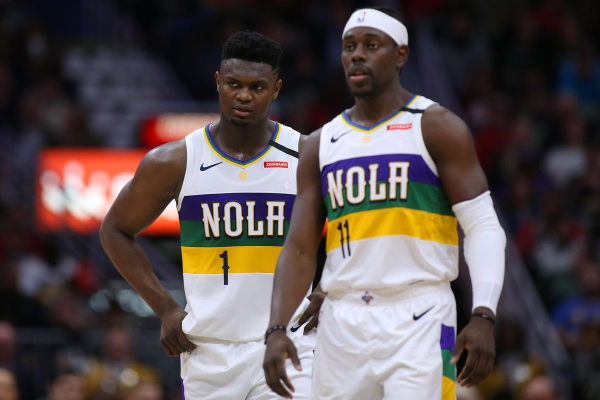 Friday night features a matchup of two teams who are currently on the outside looking in when it comes to the playoff picture as the Cleveland Cavaliers (17-41) travel to Smoothie King Center to take on the New Orleans Pelicans (25-33).

In the Eastern Conference, the Cleveland Cavaliers currently sit in 14th place, just one game ahead of the last-place Atlanta Hawks. Sitting nine games out of the last playoff spot (and six teams to hop to get there), the Cavaliers are playing more for a lottery spot than a playoff spot.

Still, they will try and compete against the Pelicans, who at least have a chance at the playoffs. New Orleans currently sits in 10th, just three games behind the Grizzlies for the last spot. Both teams will battle Friday, and tipoff is scheduled for 8 pm ET.

For as poor as the Cleveland Cavaliers have played this season, they have won four of their last five games, including a 108-94 win in their last game over the 76ers. Still, at just 8-19 on the road, they aren’t the strongest play most nights and will look to steal one on the road from the Pelicans.

Speaking of the New Orleans Pelicans, they come into this one having won three of their last five. They did lose their last matchup, a 118-109 loss at the Los Angeles Lakers, but have also beat solid teams like the Portland Trail Blazers and Indiana Pacers over the last few weeks.

They are certainly an exciting young group, especially when Zion Williamson is on the floor and will look to use their high-scoring offense to attack the Cavaliers.

The New Orleans Pelicans come into this one as a whopping 11.5-point favorite playing at home.

On the defensive side, neither of these teams has been especially solid. The Cleveland Cavaliers currently come in ranked 23rd in the league in scoring defense. They are currently allowing opponents to score an average of 114.7 points per game (114.6 on the road). For the Pelicans, they come in 28th overall, allowing an average of 117 points per game (117.3 at home).

Whether it was a coaching change (replacing John Beilein with J.B. Bickerstaff) or actually buying at the trade deadline (they brought in Andre Drummond), something has lit a bit of a fire for these Cavaliers. After winning four of their last five, the Cavaliers are looking to at least finish the season on a strong run and beating the up and coming Pelicans on the road would be a good sign.

Unfortunately for the Cavaliers, Drummond has been hampered by a calf injury, and it appears that he will be out for this one. With him out, the Cavaliers will rely even more on Collin Sexton and Kevin Love. Sexton has been averaging 19.9 points, 33.1 rebounds, 2.8 assists and one steal per game.

For Love, the veteran forward is averaging 17.4 points, 9.7 rebounds and three assists per game. Behind these two, the Cavs will look for another win on the road.

Pelicans Still Have Eyes On Playoffs

For the Pelicans, three games is not insurmountable. To do it, though, they need to start racking up wins and will look to start that against the Cavaliers on Friday.

Pelicans Win, But Can They Cover?

There is certainly no denying that the Cleveland Cavaliers have been playing better as of late, but it still boils down to the fact that the Pelicans have a more talented roster, and they have something to play for. The Cavaliers struggle on both ends of the floor, and while the Pelicans’ defense is far from stellar, their offense is elite.

I just don’t see the Cavaliers keeping up in this one, and I actually like the Pelicans to not only win but to cover the 11.5-point spread, too.