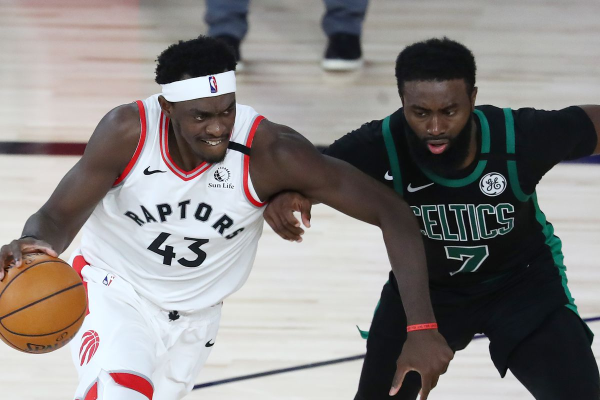 The Toronto Raptors and Boston Celtics are coming off one of the wildest endings of a game. Game 4 will without a doubt be an entertaining matchup and a pivotal game in the series. Who will gain control Boston or Toronto?

Boston has a chance to go up 3-1 on the defending champions. This is an opportunity that they can’t let slip through their fingers. Especially with the struggles that the Milwaukee Bucks are currently having in the 2nd round.

Toronto has something to play for as well. They can even up the series and regain control and momentum. The defending champions won’t be happy with getting knocked out in the 2nd round.

So far the series has been dominated by scoring. The winners have scored 100 points in each game so far. We have also seen some great performances from all over the court.

Jayson Tatum has really stepped up for the Celtics. This season he is averaging 25.4 points and 9.3 rebounds a game. Game 3 wasn’t his best performance with him only tallying 15 points. If Boston wants to win they will need him to play better.

On the other end of the spectrum, Kemba Walker didn’t have the best start to the series. In Game 2 it seemed like he couldn’t hit the broad side of a barn. Doris Burke even described it as one of the worst shooting performances she had seen from Walker.

In Game 3 Walker was much better. He scored 29 points and showed why Boston acquired him in the offseason. He can be a leader on and off the court and ensure that Boston reaches their potential.

The hero in Game 3 for Toronto was OG Anunoby who hit the game winning shot at the buzzer. When paired with Pascal Siakim, this can create a problem for Boston. These two can really stretch the Celtics defense thin. Also Toronto still has Kyle Lowry. He is one of the top point guards in the game and his leadership ability can not be discounted.

Looking ahead to Game 4, the spread is currently at 1.5 points and has the Raptors as the favorites. Coming off of an emotional win like that it makes sense why they would be favored. Right now they have the momentum.

But the smart money would be on Boston. Listening to Jaylen Brown after the game, he sounded motivated and looking to prove a point. He’s a player to watch in Game 4 as he could go off and lead the Celtics to victory.

Also as mentioned before, Tatum had an off night on Thursday. He will be looking to show that poor performances are out of the ordinary for him. Tatum could have another 30 or 40 point performance in Game 4.

Now even though there is likely to be some scoring, bettors should look to take the under. The under has hit in the first three games of the series. That shouldn’t change in Game 4. If you are confident you can even take the Celtics under with the points total currently at 106.5. If you are confident that Boston will win you can even take the under for the Raptors as well which with their point total being set at 107.5.

Finally if you are confident in the Celtics it might be worth your money to take the Celtics alternate spread with Boston being favored by 1.5 points. This could make you some serious coin depending on how much money you put down.

So there is no doubt that Game 4 between the Boston Celtics and Toronto Raptors will be an entertaining matchup. The two teams will be battling for control of the series. With the Bucks playing so poorly, whoever advances has a great chance of making it to the NBA Finals.

Expect a high scoring affair filled with plenty of moments of drama. All in all it should be a fun game for bettors to watch (even if they are rooting for the under to hit).

Tonight, two pitchers whose records could use a little polishing match up as the St. Louis Cardinals welcome the Miami Marlins to Busch Stadium to open a three-game series. Cardinals hurler Adam Wainwright has not picked up a win since May 20, while Pablo Lopez’s win in his most recent start last week was his END_OF_DOCUMENT_TOKEN_TO_BE_REPLACED