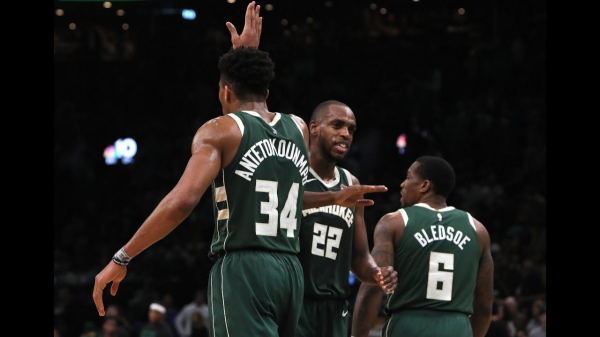 Thursday night features a battle of two of the top three teams in the Eastern Conference when the Boston Celtics (27-12) travel to Fiserv Forum to take on the Milwaukee Bucks (36-6). The Bucks come into this one with a seven-game lead over the Miami Heat for first in the conference. The Celtics sit just a half-game back of the Heat.

Even though we haven’t hit the halfway mark of the season, this is the type of signature game that the Celtics would love to win on the road. Tipoff for this one is scheduled for 8 pm ET.

This is actually the second game of a back-to-back for the Celtics. On Wednesday, they were upset by the struggling Detroit Pistons to the tune of a 116-103 loss at home. If that wasn’t bad enough, Jaylen Brown suffered a sprained thumb when he ran into Markieff Morris. With Brown questionable with a thumb injury and Jayson Tatum struggling with a knee injury, the Celtics could be playing this one shorthanded.

The Bucks come into this one on a four-game winning streak. Their most recent victory was a 128-102 thrashing of the New York Knicks on Tuesday. The Bucks have been almost unbeatable at home as they have an impressive 19-2 record playing at Fiserv Forum. They will look to make it win number 20 at home on Thursday.

The Bucks come into this one as 8.5-point favorites playing at home.

Looking For The Upset

If Boston has to play without these two, it will look to Kemba Walker to shoulder the load. Walker is averaging 21.7 points, 3.9 rebounds and 5.1 assists per game. While those are solid numbers, they will have to improve to topple the Bucks.

Giannis Antetokounmpo has been simply outstanding this season, averaging 30 points, 12.7 rebounds, 5.5 assists, 1.2 steals and 1.1 blocks per game. The scary part is that he has help, too.

Taking The Bucks To Win And Cover

It is never an easy proposition to play the Bucks on their home floor, but it is outright devastating when you have to play them on the second night of a back-to-back. Throw on top of that, the Celtics are coming off a loss to the Pistons and saw Brown sprain his thumb.

Additionally, the Bucks (who have one of the league’s best home records) had Wednesday off. Put it all together, and it is the type of night where the Bucks could stroll to an easy victory. For my money, I like the Bucks despite laying the 8.5 points.