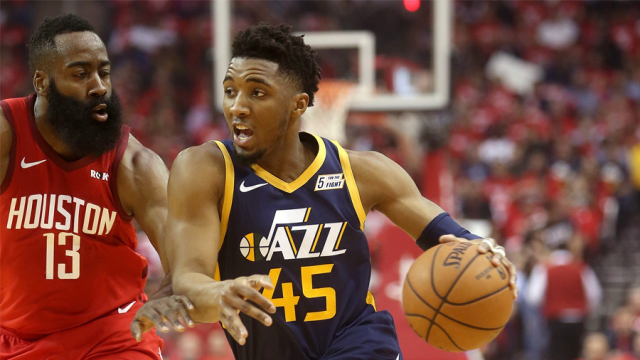 Seven of the eight teams currently earning a playoff position in the Western Conference will feel they have a chance to reach the NBA Finals. On Wednesday night, four of those teams will face off as the Thunder welcome to Jazz to Oklahoma City while the Nuggets head to Dallas for a showdown with the Mavericks.

While the Lakers lead the conference with a record of 49-14, the second-seed Clippers (44-20) and seventh-seed Mavericks (39-27) are separated by just five wins.

So, nights like this one will play a big part in determining the final seeding once the playoffs are upon us.

Let’s dive into both of this evening’s vital Western Conference matchups.

With a record of 41-23, the Jazz currently hold the fourth seed in the Western Conference. Tonight, the 40-24 Thunder will have a chance to pull themselves level with Utah as they host one of the league’s best road teams.

An added bit of interest in this matchup stems from the fact that these two teams would meet in the first round of the playoffs if their respective seeding doesn’t change.

For now, the Jazz will feel comfortable on the road. They can boast a record of 20-13 away from home. Meanwhile, the Thunder are 20-13 in their own building. Something must give.

Although the Jazz are coming off a loss to the Raptors, they’ve won five of their last six overall and are riding a six-game winning streak on the road.

The Thunder are aiming to extend their current three-game winning streak and have won 17 of their last 22 games, thanks in large part to the recent dominance of veteran Chris Paul.

Nuggets Aim To Move Up With Win Over Mavs

While the two Los Angeles clubs remain the favorites to win the Western Conference, the Nuggets are proving that they’re the biggest threat to the Lakers and Clippers.

For now, the 43-21 Nuggets trail the 44-20 Clippers. With a win tonight in Dallas, Denver would climb even closer to the second seed. To do so, Nikola Jokic and company will have to get by Luka Doncic.

Denver and Dallas have played twice this season, splitting the series thus far. Over those contests, Jokic averaged 21.5 points, 8.5 assists, and eight rebounds, which is a fair deal better than his nine-point average over the last two games.

Meanwhile, Doncic is averaging 37 points over his last two games despite failing to lead his team to victory in either contest.

What The Odds Tell Us

We all know the Western Conference is set up as Lakers, Clippers, and then everybody else. But who has a real chance to represent the conference in the NBA Finals according to the odds?

The cutoff between contenders and pretenders appears to be at +1000, where the Nuggets own the fifth-best odds. Just ahead of the Nuggets are the Jazz, sporting odds of +950.

After those five teams, the odds skyrocket. With the sixth-best odds to win the Western Conference, the Mavericks are on an island at +2100. The Thunder trail behind the Mavs with odds of +4800.

So, the odds are telling us that Denver and Utah are contenders, and Dallas and Oklahoma City are pretenders.