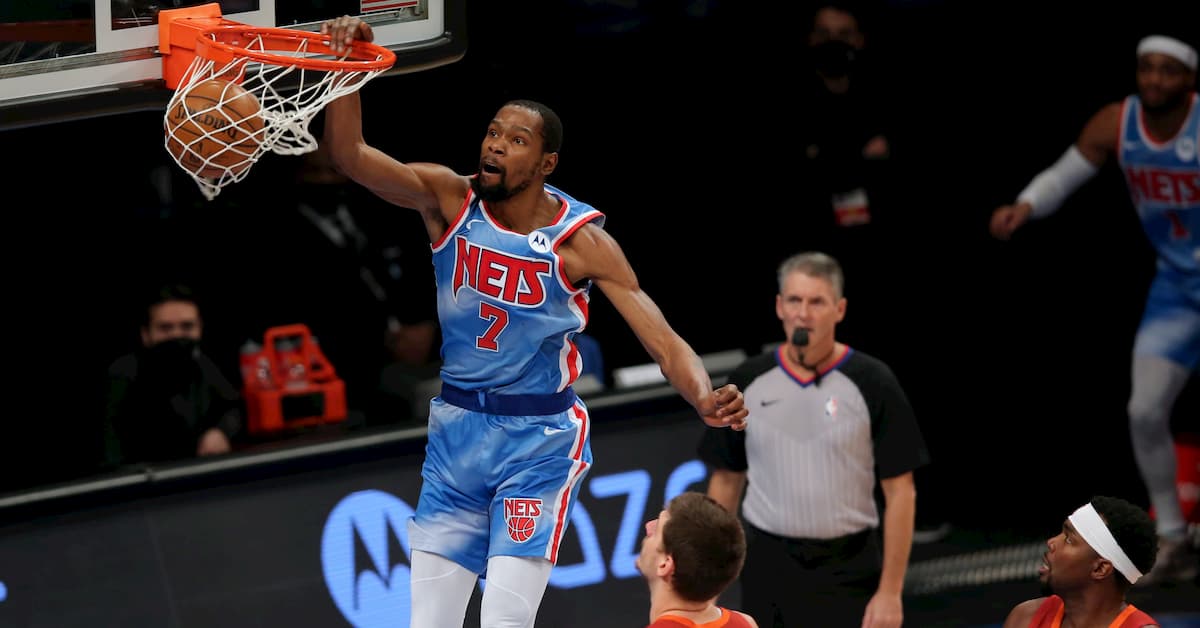 There will be a battle of New York in the NBA Wednesday night as the Brooklyn Nets (6-6) head across the bridge to Madison Square Garden to duke it out with the New York Knicks (5-6), who are attempting to end a losing streak.

The Nets played the Denver Nuggets on Tuesday night, defeating them 122-116. Without Kyrie Irving in the lineup once again, Kevin Durant put the Nets on his back, putting up what was nearly a triple-double with a 34-9-13 stat line. Caris LeVert also had 20 points while coming off the bench.

Meanwhile, the Knicks have lost three games in a row after previously winning three straight. Their most recent loss came against the Charlotte Hornets on Monday by a score of 109-89. In a game where the Knicks struggled to score, Kevin Knox led the team in points with 19, while Mitchell Robinson had a double-double (12-11-0).

Nets vs Knicks: By the Numbers

This game will be about opposites when it comes to pure offense.

The Nets are one of the top teams in the NBA when it comes to scoring, as they’re putting up 118.8 points per game (3rd).

The Knicks are the second-worst offensive team in the league, scoring 100.1 points per game, which is only better than the Cleveland Cavaliers (98.9).

Defensively, the Knicks are the complete opposite of how they are on offense, holding opponents to 105.5 points per game, which is the second-best league-wide. This is considerably better than the Nets, who are allowing 113.1 points against per game, which is ninth-worst in the NBA.

When the Nets brought both Kyrie Irving and Kevin Durant to the team last season, the ideal vision of the team looked a bit different than it does now.

While Durant was slow coming back from his Achilles injury, Irving has already missed four straight games due to personal reasons. To make matters worse, a video surfaced on Monday night of Irving at a family party without a mask on and is now under review by the NBA.

It remains to be seen when Irving will be back in the lineup, he’s not expected to return until next week at the earliest.

However, if Durant plays again like he did against the Nuggets and much like he has for the rest of the season, the sky’s the limit for the Nets.

If the Nets want to continue their winning ways, they’re going to need continued support from players like Caris LeVert (18.4-3.8-6.0) and Joe Harris (14.4-3.8-1.9), who have both stepped up throughout the season when the team has needed it, whether that was because of one of their stars being out of the lineup or otherwise.

Can the Knicks get Back to Winning Ways?

When they were on a winning streak, people were saying how the Knicks looked like they were “for real” and that they may be able to make the playoffs for the first time since 2012-13.

Since then, during this losing streak, the Knicks have been struggling offensively, averaging less than 90 points per game.

There were conversations about how Julius Randle was looking like an all-star this season and, while those honors are still possible, he’s been inconsistent during the losing streak, scoring 18, 29, and 11 points in each of those games. However, he has also averaged 11.8 rebounds per game over six games in January, which is sixth-best in the league for the month.

Sophomore RJ Barrett has improved his point totals this season, but his shooting splits have continued to be abysmal (.365/.180/.686) and he’s only made two of his last 21 three-point attempts.

It’s simple: when the Knicks were winning, everyone was contributing and as soon as that stopped, the wheels came off. If they want to win, they’re going to need to start averaging more than 90 points per game.

Despite both teams having similar records, I think the Nets are playing below their potential and should win this game. Even without Irving in the lineup, I still like their team from top-to-bottom more so than the Knicks.

The Knicks have nobody who compares to Durant and, overall, the Nets have more scoring threats than the Knicks can handle.

Best Bet: Take the Nets to cover the spread.