New York Knicks vs Toronto Raptors: Can the Raps Get off the Schneid as Massive Faves? 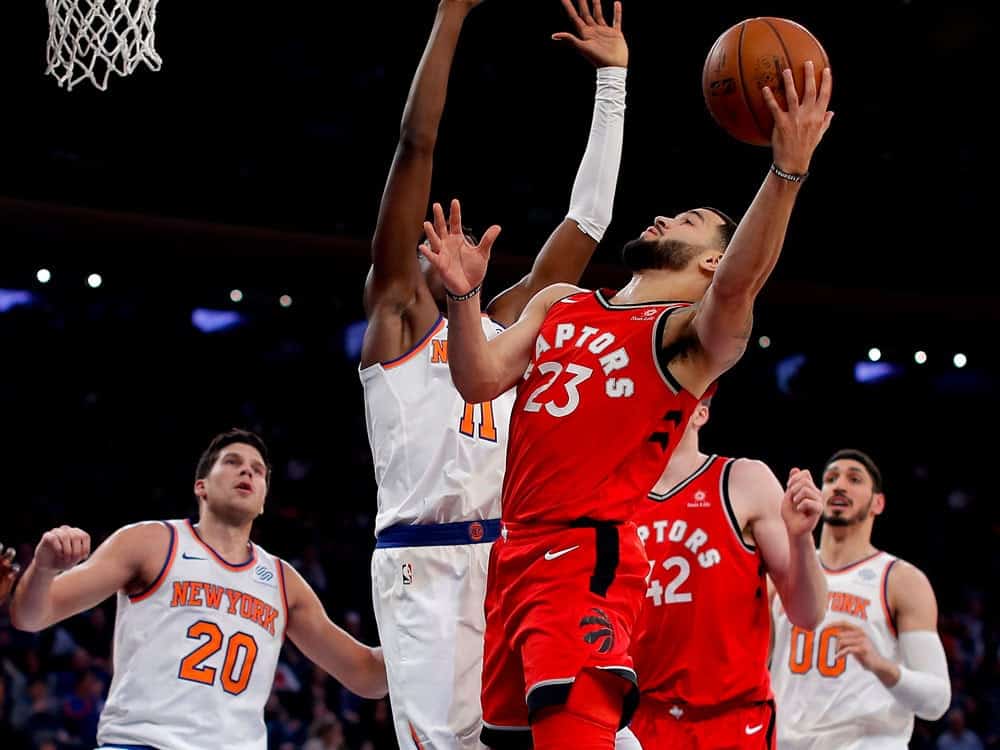 Can the Knicks Finally Turn Things Around?

The Knicks are 2-2 this season and have been led by former Laker Julius Randle. Many were surprised when the Knicks upset the Milwaukee Bucks 130-110 in blowout fashion this past Sunday, earning new head coach Tom Thibodeau his first win with the organization.

Julius Randle has been sensational for the Knicks so far, leading his team with 23.7 points, 10 rebounds and 6.3 assists per game. He is a versatile big who can truly do it all. He will be a major component if the Knicks hope to beat the Raptors as big underdogs.

New York has two players averaging over 20 points per game – Julius Randle and Alec Burks, who is coming off the bench. RJ Barrett is averaging close to 18 points as well. If they can consistently produce like this throughout the season, the Knicks should be in the playoff hunt.

Retooled Raptors Struggling out of the Gates

Toronto has many of the same faces leading the way from last season on their roster, minus big men Marc Gasol and Serge Ibaka. Toronto is hoping this is the year rapidly evolving wing Pascal Siakam leaps into superstardom. His skillset and length make him a matchup nightmare on both ends of the floor. Toronto also paid Fred VanVleet in the offseason to come back and command the offense with Kyle Lowry.

This will be the Raptors’ second season without Kawhi Leonard, who led them to their 2019 NBA Championship. Will Nick Nurse be able to coach his team back to the NBA Finals after being eliminated in Game 7 of the Conference Semifinals to the Boston Celtics in the NBA Bubble? they fell short last season. They will need to be more productive offensively this year if they hope to do so.

So far, VanVleet is Toronto’s leading scorer at 18 points per game, Siakam is the top rebounder at 10.5 per game, and Lowry leads in assists, at 10 per game.

It is early in the season, and teams are still becoming acquainted with new staff and players. Coming off the shortest offseason in NBA history, anything can happen at this point of the season.

It is too early to determine either team’s identity – the Knicks have lost two of their four games by more than 10 points and won the other by 20. The Raptors have only played three games and they lost all three. However, the advantage lies with Toronto in this matchup because of their options in their rotation and the odds back that up.

Toronto has five players averaging over 10 points per game. They also have the advantage defensively. The Raptors are tied for second in the league in blocks per game at 7 and have great athleticism as well as length throughout their lineup.

The forwards in their rotation can each hold their own, switching to guard anybody on the floor. OG Anunoby has a 7’2″ wingspan, Siakam has a 7’3″, and Chris Boucher has a 7’4″. Two out of three of these players are typically on the floor at all times during games, creating havoc in passing and shooting lanes. Boucher averages 4.5 blocks per game, Anunoby is fourth in the league in steals per game at 2.5, and VanVleet is eighth at 2 – the Raptors can bring it defensively.

Take the Raptors on the moneyline and the spread.

Reigning NBA Coach of the Year Nick Nurse will have his team ready to go as it is only a matter of time until the Raptors settle in and begin playing as one of the best teams in the Eastern Conference, which they have been the past few seasons. Nurse is an excellent defensive coach. He’s certain to have a game plan for minimizing Julius Randle’s impact. If he doesn’t produce, the Knicks will have a hard time winning.