Bucks vs. Heat Preview: Can the Heat Continue Their Dominance Over the Bucks? 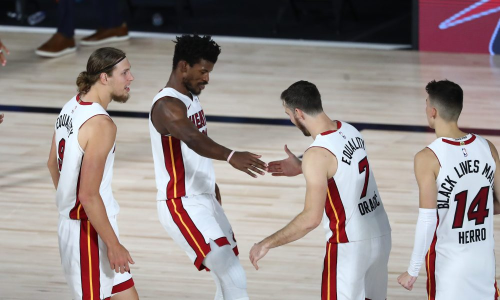 Last season, the Milwaukee Bucks went into the playoffs as the #1 seed in the Eastern Conference for the second season in a row and high hopes of reaching the NBA Finals. Then they met the Miami Heat in the Eastern Conference semifinals and were promptly booted out in five games, with the Heat eventually going on to reach the NBA Finals themselves.

This season, hopes are high for the Bucks again, and so in the future, with two-time reigning MVP Giannis Antetokounmpo having signed a long-term supermax deal to remain in Milwaukee. The Heat is hoping to prove that last season’s run to the Finals was no fluke as well, and a win over the Bucks when they meet in Miami on Tuesday night will be an early statement. It will be the first of a back-to-back against the Bucks, with the two teams facing off again in Miami on Wednesday night. Tuesday night’s game tips off at 7:30 pm and will be televised nationally on TNT.

The Bucks are 1-1 heading into Sunday’s road tilt against the New York Knicks. Milwaukee opened with a tough 122-121 loss at Boston last Wednesday. They were ahead in the final seconds until Jayson Tatum hit a three to put the Celtics ahead by two. Then after Giannis was fouled with less than a second left, he made the first free throw but missed the second, which would have sent the game to overtime. They bounced back from that loss by trouncing Golden State 138-99 on Christmas Day, outscoring the Warriors by 29 points in the second half.

Giannis had an off-day shooting against the Warriors, going only 4 for 14 from the field and 7 of 15 from the free-throw line, but he still posted a double-double, his second straight to start the season, with 15 points and 13 rebounds. Khris Middleton has had a big start, going for 27 points, 14 rebounds, and eight assists against the Celtics and following that up with 31 points against the Warriors. Middleton, a 41.5% shooter from deep last season, has made 9 of 16 threes to open the season.

To boost their chances of reaching the NBA Finals for the first time since 1974, the Bucks acquired veteran guard Jrue Holiday from the New Orleans Pelicans. The holiday is off to a solid start, averaging 18.5 points, five rebounds, and 4.5 assists and making 16 of 24 shots from the field thus far. Offseason acquisitions D.J. Augustin and Bobby Portis contributed in the win over Golden State, with Augustin posting 13 points and going 3 for 3 from three in only 13 minutes and Portis notching 10 points and 12 rebounds in 26 minutes.

The Heat have also started 1-1 this season, losing 113-107 at Orlando on Wednesday and bouncing back with a 111-98 win over New Orleans on Christmas Day. Jimmy Butler played only 16 minutes and scored only four points on 2 of 7 shooting against the Pelicans, but he averaged 23.4 points, 5.8 rebounds, and 4.4 assists and shot 52.6% from the field in the 4-1 conference semifinal series win over Milwaukee last season. Butler sprained his right ankle against the Magic and did not play in the second half against the Pelicans due to stiffness in that ankle. It’s early in a long season, so caution is sure to be exercised with Butler. But with no games between Friday and Tuesday, Butler may be able to go against the Bucks with no significant limitations.

So far, the Heat are being led in scoring by Bam Adebayo (21.5 points, 7.5 rebounds, three assists per game), Goran Dragic (19 points, three rebounds, eight assists per game), and Duncan Robinson (18.5 points, five rebounds per game). Robinson made 270 threes and shot 44.6% from there last season, and he has made 10 of 19 threes in the first two games this season, including 7 of 13 against New Orleans. Dragic, whose best single-season average for assists was 7.4 in Phoenix in the 2012-13 season, had seven assists against the Magic and nine against the Pelicans. However, he is only 1 of 8 from three, when he is a 36% shooter from deep for his career.

The Heat were, at least until recently, trying to land James Harden, but of the new faces they do have already, Avery Bradley, who came over from the NBA champion Lakers in the offseason, scored 12 points and dished out four assists in the win over New Orleans after not playing against Orlando.

Odds for Bucks vs Heats

The Heat have dominated the Bucks in recent times, and they are a good pick to take the win on Tuesday night. It does not mean that there is anything wrong with the Bucks, however. The Heats is just a strong team at home and strong against the Bucks, so even if the Bucks are favored to win this one, take the Heat to cover and to win, even if Butler is not 100%.

Tip: Heat to cover and win

After extending their hot and San Diego’s cold streak, the Seattle Mariners will be looking to leave Petco Park with a two-game sweep as they take on the Padres this afternoon. Yesterday, the Mariners pounded out a dozen hits and plated eight runs, and Chris Flexen pitched 6.2 shutout innings to collect his third straight END_OF_DOCUMENT_TOKEN_TO_BE_REPLACED