#2 Brooklyn Nets vs #3 Milwaukee Bucks Series Betting Preview: Things Are About to Get Real in the Eastern Conference 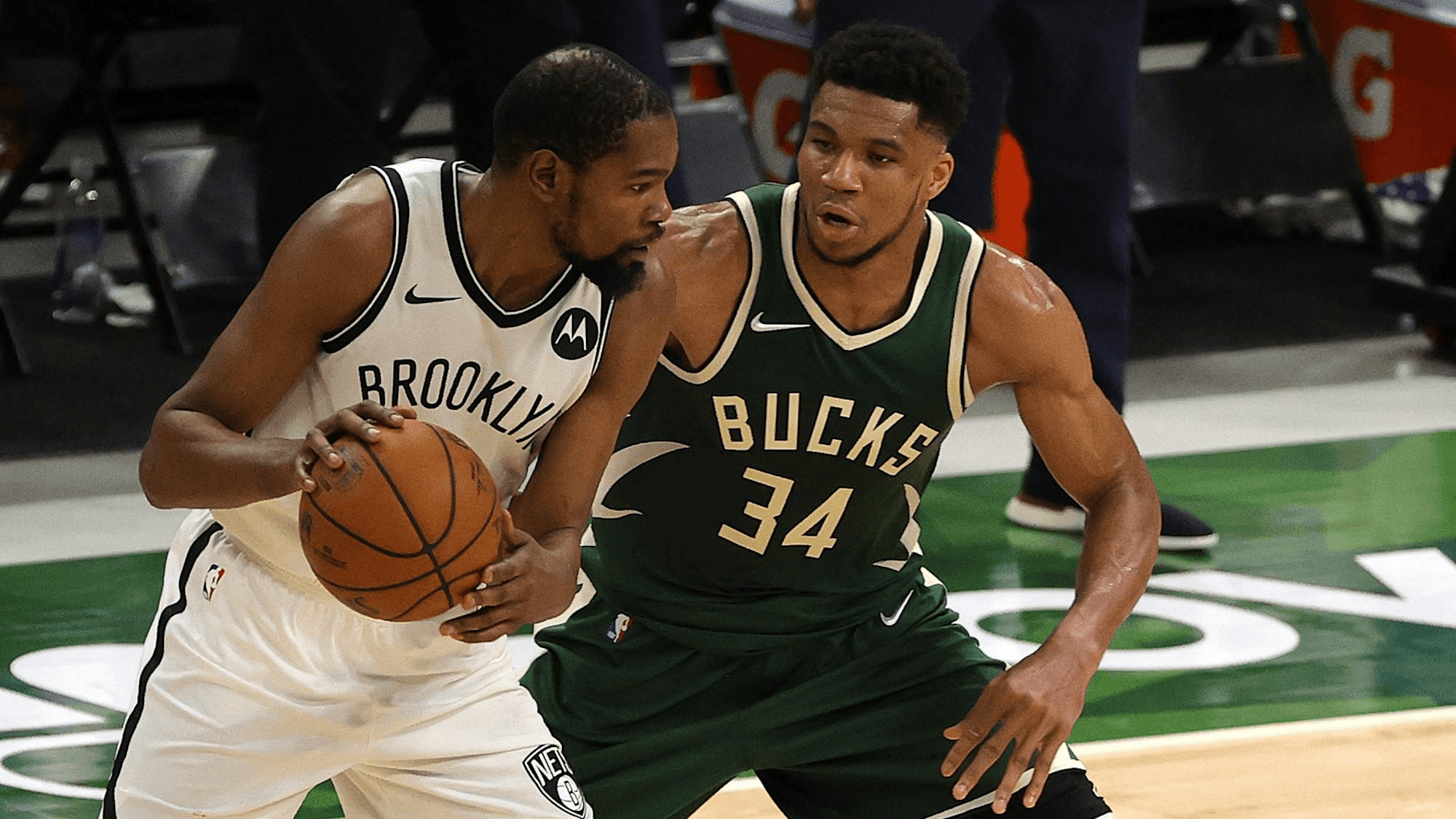 The first round in the Eastern Conference played to form so we get Milwaukee and Brooklyn meeting in round two. The series starts on Saturday.

Milwaukee advanced by virtue of sweeping Miami. The Heat ended the Bucks’ season a year ago but were nowhere close to a match for them this time around. The first game was close but after that, the Bucks found a gear the Heats couldn’t match. The only down note of the series was that guard Dante DiVincenzo got hurt and is done for the season. He was a starter but not a primary contributor.

Brooklyn needed five games to dispatch Boston. The Nets did look good but it was also obvious that Boston just didn’t have the horses. The Celtics were missing Jaylen Brown from the beginning of the series and then lost Kemba Walker mid-series. Brooklyn’s stars played very well, though I am not sure they are quite playing well together just yet.

During the regular season, these teams met three times with the Bucks taking two. Those two wins were only a month ago, but it is hard to draw too much from them as James Harden did not play in either game. In the game the Nets did win, Irving did not play so we have yet to see these teams face off with their best lineups available.

With the Philadelphia 76ers advancing, but showing plenty of weakness, the winner of this series looks to be the likely representative of the Eastern Conference in the NBA Finals. That is what the odds were telling us before the playoffs even began too as Philadelphia was being given less of a chance to win the East, even though they had what looked to be the easier path. This should be an exciting series. I can’t wait for it to get started.

Nets vs Bucks odds are via FanDuel Sportsbook as of Thursday, June 3 at 5:30 am ET.

After round one results Brooklyn is still a pretty solid favorite to win this series. If you have liked them all season long there is no reason to jump off them based on what we have seen in the playoffs so far.

The series price on the Nets is very interesting compared to the series correct score odds. If you like the Nets to advance, the better play would be to stack all those Nets winning outcomes. If they win in Games 4, 5, or 6 you would at least break even, and if it went to game seven you could get creative with some hedging.

On the Bucks side of things, there could also be better value in betting a similar stack instead of just taking them for the series. Again having those correct score bets in your pocket means you can create some strong positive EV opportunities. The series price is very appealing too if you just want to keep it simple.

Brooklyn money might be driving some of the gaps in these prices, which means there are definitely buying opportunities. I would rate these teams as actually pretty even.

1,2,3 – The Nets have three stars, all of who look like they will be Hall of Famers. In the case of Kyrie Irving and Kevin Durant, those players have also been on title-winning teams while James Harden has never won a title. There is no doubting that talent but with due respect to Irving and Durant, none of these guys have been the lead guy on a title winning team. Even though they are superlative on their own, they are still figuring out how to mesh that talent on a game to game basis and I am curious to see how it all works out. Especially with some adversity coming.

Some Defense Please – Brooklyn gave up 114 points per game on defense during the season. They held Boston below that number three times in five games, but I am not sold that this means the Nets have found a level of defensive intensity suitable for the playoffs. The simple fact is that Boston just didn’t have the depth offensively to compete in the past series. Jayson Tatum more than got his, and even though Giannis is a different kind of offensive player, he is going to be a problem the Nets have to solve. They didn’t during the regular season.

Doing the Dirty Work – Every winning team needs someone who is going to sacrifice some stats, or their body, to help the team get a win. That is not the reputation of the Nets’ stars, so they have to find some grit elsewhere. Shooter Joe Harris has a little bit of that, but I worry that the injury to Jeff Green might be felt in this way. His absence is giving more playing time to Blake Griffin, and this has never been his specialty. In a close series those one or two extra possessions can mean everything.

Best Player on the Floor – Giannis has two NBA MVP awards to his credit, but playoff success has been limited. I know criticizing one player for team failures is unfair but in the NBA less so. If he truly is one of the best players in the game, and a future Hall of Famer, at some point he has to be able to put the team on his back. In many games he is the best player on the floor, but in this matchup against Brooklyn he has stiff competition. If he plays like “that guy” most nights the Bucks can pull the upset

No Holiday – I loved the pick up of Jrue Holiday this past offseason. His regular season was a little uneven, but he played well in the Bucks’ sweep of the Heat. For this series, his defensive abilities will be just as important as his offense. He can limit whichever of the three stars he happens to be guarding. Personally I would put him on Harden. He is not going to be fooled (as much) by all of his slight of hand and will force him to hold onto the ball just a little more. He is also the Net who I think can’t afford to play poorly if Brooklyn is going to advance. By strategically using Jrue properly, this series will be no vacation for Harden.

Finding the Weakest Link – This is the time of year where you stop messing around. No more keeping guys happy and making sure everyone has a chance to share in the success. Now is the time to go for the jugular. If forward Khris Middleton makes a couple of shots, keep feeding him, you know? Milwaukee has to find the weakest link on the Nets’ defense, probably Kyrie Irving, and exploit it mercilessly. A more democratic approach has not gotten them where they wanted in the past. Maybe Giannis needs to be a decoy this series. I don’t know, but coach Mike Budenholzer is facing off against a rookie coach in Steve Nash. If he can’t find the weakest link and exploit it, then his run with the Bucks will be done.