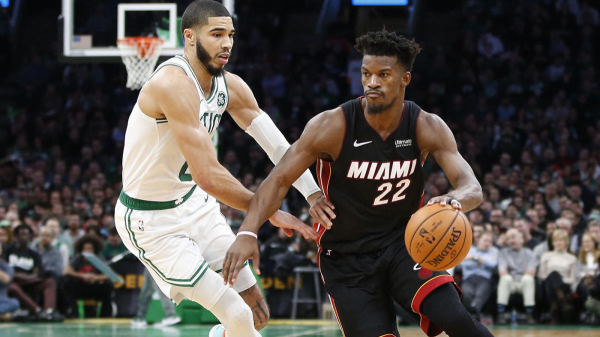 The Eastern Conference Finals are upon us. I’m willing to bet that even just a month ago, not too many people thought Miami would be here. But that’s why they play the games, and the Heat have only lost one of them so far in these 2020 playoffs.

It’s clear the Heat have found their guy in Jimmy Butler. They’ve also built a strong supporting cast around him with Bam Adebayo and a host of shooters and tough defenders. We also can’t forget about veteran Goran Dragic, who is averaging close to 20 points a game in the playoffs.

Miami is deep and riddled with talent at every level. On the other side of is a Boston team that a few more people predicted would be here. Wings Jason Tatum and Jaylon Brown are bonafide stars and are complimented well by guards Marcus Smart and Kemba Walker. The Celtics are another really deep, well-coached team, much like their upcoming opponent. We are in for a treat when these two Eastern Conference rivals take the court in what should be a long, hard-fought series.

Tuesday night will mark the the fourth time the Heat and Celtics have met this year. Boston holds the regular season edge at 2-1, but this series is a whole new game. Miami has gone through many forms this season to get to the roster that will enter Tuesday night’s matchup. The C’s haven’t seen this fully stocked Heat team with Andre Iguodala and Jae Crowder, who will be key to slowing down Boston’s wings.

Let’s look at some key matchups before we get into the betting lines. With these two teams’ style of play, it will be important to watch for the defensive matchups Miami has for Jason Tatum. Unlike the Raptors, the Heat have plenty of big bodies to throw at him. Tatum versus a mixture of Bam, Iguodala and Crowder will be worth paying attention to. On the other side, it will be interesting to see how a guy like Marcus Smart plays against Jimmy Butler and what the Celtics answer for Dragic will be. Kemba Walker is a hard worker on the defensive end, but he was attacked relentlessly by the Raptor guards last round, and the Heat may try to do the same. Another thing to monitor will be the availability of Gordon Hayward. I expect Game 1 to be a well fought chess match that comes down to the wire.

Two teams stats to keep in mind when picking your winners for game one and for the series are team 3pt shooting percentage and free-throw attempts. Miami edges Boston in both categories for these playoffs. For the past two series, Miami has shot 38% from 3 point range as a team while Boston sits at a lower 34%. Miami also averages 4 more free throw attempts per game, a stat Jimmy Butler prides himself on. He alone averages 10 a game, 3 more than the highest Celtic player.

For Game 1, Draftkings has Boston favored to win at -1.5 with the O/U set at 210 points. In the three times these teams have played this year, only once have they gone over 210. At the most important point of the season thus far, I anticipate them to go under in game 1. The defensive intensity will be high for both of these squads. Draftkings has picking the Celtics to win and the under at +245. They have the Heat to win and under at +280 as well. Boston moneyline pays out at -120, while Heat moneyline nets you +102.

When looking at the series as a whole, Draftkings has Boston to win at -134 and the Heat at +110. If you want to go even further, it’s fun to look at betting on the correct series score. The biggest payout is for a sweep with the Celtics at +1000 and the Heat at +1500. With the competitive nature of these teams, I doubt that will be the outcome. More realistic lines to take would be Boston to win 4-2 at +420, or the Heat to win at 4-2 at +500. The Heat to win in 6 is a nice payout for a very possible outcome.

In terms of Game 1, I’d look to go with the Heat to win and the under. They grind hard on almost every play and have been virtually unscathed in these playoffs. Boston is coming off a long, grueling seven game series with the defending champion Raptors, and that could impact the outcome on Tuesday night.

Tonight, two pitchers whose records could use a little polishing match up as the St. Louis Cardinals welcome the Miami Marlins to Busch Stadium to open a three-game series. Cardinals hurler Adam Wainwright has not picked up a win since May 20, while Pablo Lopez’s win in his most recent start last week was his END_OF_DOCUMENT_TOKEN_TO_BE_REPLACED