After Call With Commissioner, NBA Heading Toward Return 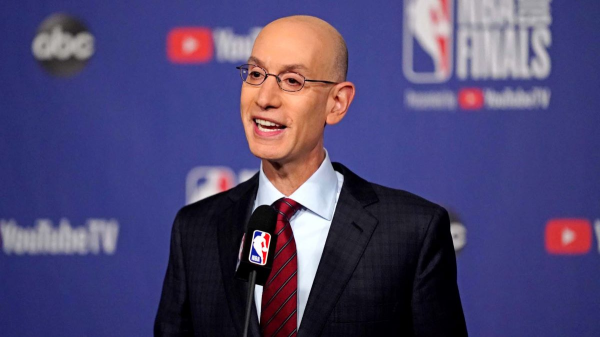 Shrouded in uncertainty, the fate of the NBA season has been in question over the past two months. After a board of governors call with NBA commissioner Adam Silver, there’s increasing positivity regarding the league’s ability to finish out the 2019-20 season.

The facts of the situation place Silver and the rest of the NBA in a precarious position. Because there will not be a vaccine or cure for the coronavirus in time for this season, the decision to resume play will come down to risk tolerance.

According to owners and team executives who participated in the board of governors’ call with Silver, there may not be as much risk tolerance needed as previously thought.

Coupled with positive conversations with the players about wanting to continue the season, the league’s progress toward minimizing health risks has encouraged a sense of legitimate hope that the 2019-20 campaign will be allowed to resume and be played to completion.

Among the league’s chief tasks in preparations for any return to play is studying coronavirus-related factors, including new case trajectories as states reopen, new developments regarding the types of available tests, and more.

While the general sentiment regarding a return is positive, there’s no current plan for a format to accompany a resumption of play. However, reports are pointing to the idea of hosting at least a significant portion of the remaining season in Las Vegas and at Orlando’s Walt Disney World Resort.

How Many Positive Tests Would Be Too Many?

One of the challenges facing the league in the face of a return to play is the lack of available testing. According to reports, the league noted on the board of governors call that it’s unlikely rapid-response tests will be widely available within the next month.

At this stage, teams are using a variety of tests to monitor the health of their players. However, the testing procedure would be standardized — including the use of a single type of test — in the case of a return to play.

Also discussed on the call was the potential for continuing to play if a player tests positive for the coronavirus. According to reports, Silver told call participants that if a positive test would “shut us down, we probably shouldn’t go down this path.”

Before the league can resume play, all parties — the league, the NBPA, and health officials — will need to identify and agree on a number of positive tests that would remain within acceptable limits.

As the NBA heads toward a return to play, league officials expect 22 of its 30 team facilities to be open by Monday.

How a Shortened Season Could Affect Contenders

Although a format is yet to be agreed, the current NBA season will be shortened to accommodate the calendar in the wake of the coronavirus pandemic.

Whether regular-season games are played, the playoffs begin immediately, or a play-in tournament is used to determine the playoff field, the favorites when the season was suspended remain the frontrunners to win the NBA Finals.

But how might a shortened season impact those top teams?

The Lakers could stand to benefit from a shortened season due to the reduced mileage placed on the body of LeBron James, who resisted the idea of taking games off for load management during the regular season.

The Clippers may suffer from a lack of continuity after experiencing early-season injuries and adding pieces at the trade deadline.

When play resumes, two of those three teams are highly likely to face off in the 2020 NBA Finals.