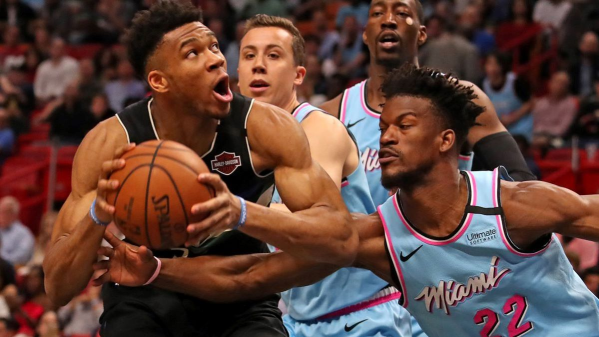 Monday evening included one of the rarest things in all of sports: Giannis Antetokounmpo looked human for a night.

The Bucks’ rampage over the Eastern Conference hasn’t stopped, but it was certainly slowed as they ran into Bam Adebayo and the Miami Heat yesterday. The Heat became the only team in the NBA to earn two wins over the Bucks this season.

Miami’s ability to win stemmed from their suffocating defensive effort against Giannis, an MVP favorite who’s looked unstoppable for the majority of the year. Against the Heat, Giannis was held to zero transition points for just the second time this season.

Even more shocking was the fact that Giannis was held to a season-low 13 points in the contest. With Adebayo serving as the primary defender, the reigning MVP went just 1-of-10 from the field.

Adebayo was a force for Miami, putting up 14 points, 13 rebounds, five assists, and three blocks.

With 18 made three-pointers, the Heat were able to overcome the Eastern Conference’s top team by a score of 105-89 – a season low for Milwaukee.

Could Miami Be Milwaukee’s Kryptonite?

Adebayo’s size and athleticism makes him uniquely suited to guard a player of Giannis’ ability. That appears to be a vital reason why Miami matches up so well with Milwaukee.

After yesterday’s victory, the Heat are 2-0 against the Bucks this season, meaning they’ve already won the season series. These two squads will meet up for a final regular-season matchup later in March.

So, is Miami the one team standing in the way of Milwaukee’s trip to the NBA Finals?

As a team, the Heat held Giannis to a 6-for-18 shooting night, his second-worst of the season. If they can do that consistently, they have a great chance to take down the top-seeded Bucks in a seven-game series.

Unfortunately for Milwaukee, that could mean an early exit from the playoffs.

The 52-9 Bucks currently sit first in the Eastern Conference and will almost certainly finish that way, as the second-seeded Raptors are 9.5 games back. The 39-22 Heat are fourth in the conference.

If those seedings hold, Milwaukee could see Miami in the second round of the playoffs. While a pair of regular-season games isn’t enough to make the Heat the favorite in that series, we’ve certainly seen enough to know Miami has a better chance than most teams against the Bucks.

Milwaukee has yet to lose its 10th game of the season, so it’s fair to place this team as the favorite in the Eastern Conference. With the reigning MVP averaging 29.6 points, 13.8 rebounds, and 5.8 assists per game, the Bucks are poised for a championship run.

The Bucks are a complete team that can normally afford to sit Giannis in the fourth quarter because they’re blowing teams out.

All of the above equates to Milwaukee serving as the current favorite to win the NBA Finals with odds of +230, with the Lakers (+300) and Clippers (+320) trailing behind.

In the Eastern Conference, the Bucks are massive favorites with odds of -165. At +700, Boston is the closest team to Milwaukee.

Should the odds be closer in the Eastern Conference?

We’ve now seen that a team like Miami isn’t going to be scared of Milwaukee in the playoffs, but nobody else in the conference has the upper hand on the top seed. Sure, Boston and Philadelphia have taken a game off the Bucks, but Giannis’ team has also handed those teams defeats this season.

So, the only reason to lengthen Milwaukee’s odds in the Eastern Conference is if Miami can sweep the Bucks in the regular season and finish fourth in the conference, setting up a second-round matchup.

Until then, Milwaukee is still the heavy favorite.