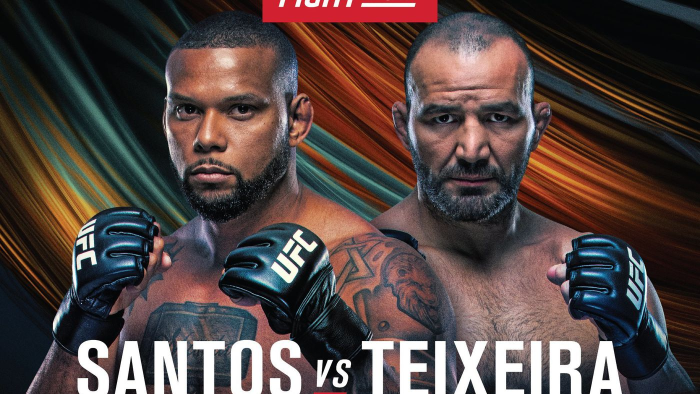 UFC Vegas 13 is right around the corner (slated for November 7th, 2020). Ahead of UFC Fight Night, the card is already out and it hosts a stellar group of heavy hitters, great matchups, and assured entertainment across the board.

In a packed schedule that will run until December 19th, this week’s fight card will take place at the UFC Apex Center in Las Vegas.

All of the preliminary fights will be simulcast on ESPN, ESPN+, and ESPN Deportes in the US. For the main event, however, you’ll have to subscribe to ESPN’s pay-per-view service as part of the “UFC on ESPN” schedule. Prelim fights start at 7 pm ET.

Two experienced fighters headline the event in Thiago Santos and Glover Teixeira. Both these light heavyweights have previously stood as contenders for the title and, ahead of their fight, look to once again fight for the coveted UFC belt.

This fight has been put on fight cards on three separate occasions previously – twice amid the pandemic. However, a combination of factors, not least the fact that both men contracted the virus last time, led to rescheduling. Hopefully, everything goes to plan this time and we can witness these two go at each other in the octagon.

This run came to a painful halt following a split-decision loss at the hands of Jon Jones at UFC 239 in July 2019. That isn’t to throw any shade at his opponent on the day. In fact, not only was it the first time Jones wasn’t favored by all the judges, Santos’ post-fight MRI showed that he had torn his ACL, PCL, MCL, and the meniscus in his left knee.

This performance led to mixed results across the board. Some reports hailed Jones for dominating the fight and avoiding unnecessary risks. Others held that Santos should have had the judges’ decision based squarely on the fact that he managed to take the fight to five rounds after rupturing almost every muscle and tendon in both limbs. Either way, the 36-year-old has a record of 21-7 with 15 knockout victories.

Teixeira, on the other hand, comes off a fight in May against Anthony Smith where he showed his true penchant for convincing victories. This means that the Brazilian has won four straight fights, two of which were by submission.

Teixeira has a background in Brazilian Ju-Jitsu and this plays into his penchant for grappling and taking fights to the mat. This is evident especially considering his eight career submissions so far (roughly 25% of his win tally). That said, he also manages to combine this with more traditional boxing moves, tying together intricate combos across both styles. Bottom line, if Teixeira manages to pin his opponent on the ground and have his way, it’s probably safe to say they might not get up.

Ahead of UFC Vegas 13, FanDuel already has various odds out on the fight. Here’s a breakdown:

From the bookmakers’ odds, it’s clear that Santos is the overwhelming favorite to win this fight. However skilled Teixeira is on the mat, it might be difficult for him to contend with Santos’ sustained flurry of blows. Either man could conceivably win this fight, but Santos brings more in his arsenal – including an age advantage.

At UFC Vegas 12 on 31st October 2020, two of the greatest fighters to ever grace a UFA mat (Uriah Hall and Anderson Silva) faced off in what many consider an exhibition fight for the ages. Dana Hall, the UFC boss, sanctioned the fight as something of a send-off for the Brazilian Anderson Silva (aged 46) who, himself, had teetered around the decision to retire for a while.

Hall clipped his legendary opponent with his right hand, sending him to the ground. He then unleashed a flurry of blows while Silva was down, ensuring victory via TKO at the 1 minute and 24-second mark of the fourth round.

Following the fight, both players clasped hands in mutual respect for one another’s accomplishments.

After extending their hot and San Diego’s cold streak, the Seattle Mariners will be looking to leave Petco Park with a two-game sweep as they take on the Padres this afternoon. Yesterday, the Mariners pounded out a dozen hits and plated eight runs, and Chris Flexen pitched 6.2 shutout innings to collect his third straight END_OF_DOCUMENT_TOKEN_TO_BE_REPLACED