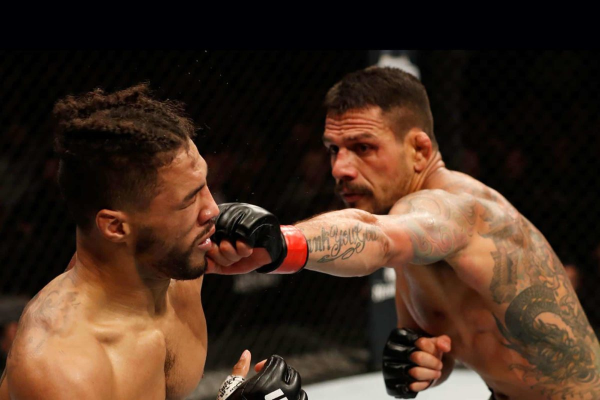 The UFC returns to ESPN this weekend with Rafael dos Anjos vs. Leon Edwards in San Antonio, Texas, Saturday night. The card features 13 fights total, but we will focus on the main event and a few of the best values.

Edwards comes into this fight on a seven-fight win streak that includes a main-event win over Donald Cerrone and another big win over Bryan Barberena. Even with these wins, I think that Edwards hasn’t gotten the treatment that he thinks he should get.

This is likely due to Edwards’ ability to slow the fight down and really make the fight a grind. You don’t normally see Edwards take too many chances, and I think it is really interesting stylistically. Edwards is not truly a “point fighter,” but his resume would suggest otherwise.

This five-round battle will really put Edwards to the test because dos Anjos will not allow Edwards to control the fight the entire time. What I am looking for is how quickly dos Anjos can disrupt this slow pace.

dos Anjos has lost two of his last three fights, which were all scheduled for five rounds. However, I think that the opponents in Usman and Covington are more impressive on the ground than Edwards, which is where he typically gets in trouble.

Since dos Anjos is used to facing this elite level of competition in recent fights, I think that he should have the confidence to eventually push the pace. If he does this, I think dos Anjos can get a late finish or a decision by winning the last three rounds. I like dos Anjos at +100 here in the main event.

This fight is almost -700 to go to a decision, so we need to think about which guy is likely to get the early stoppage here according to Vegas. Walt Harris is 36, but he was formerly an elite athlete, and I think that will give him an edge over Aleksei Oleinik.

Oleinik is one of the oldest fighters in the UFC, and he is a slow fighter, even for the heavyweight division. Oleinik is going to look to close the distance here and try to fight Harris in a more technical way.

Harris is a solid boxer, but he is very, very raw as a fighter, and I do think the Oleinik is the better raw fighter if these two were simply tested on their toolbox. However, styles make fights, and I think that Harris’s athleticism and ability to move away from Oleinik should be the key to victory here. Give me Harris to win here at -150, and I will likely sprinkle in props on a first-round KO.

These are two of the biggest heavyweights in the division, and it is not often that we see two guys that actually show up very in shape and still 265 pounds. These fighters are almost a pick ’em, and it’s easy to see why.

Juan Adams is a big, athletic body that isn’t the best fighter but has true fighting skills that he has worked for a long time to develop. Former NFLer Greg Hardy is an elite athlete turned fighter that is still incredibly green when it comes to fighting.

This matchup is going to be really interesting because I am curious to see how much each fighter’s mental game has improved. Hardy is not a smart fighter, but I’m concerned that Adams isn’t smart enough to make Hardy pay for his lack of experience. Since this is the case here, I like backing Hardy at -110 because he is simply the better athlete in a fight that lacks elite skill.