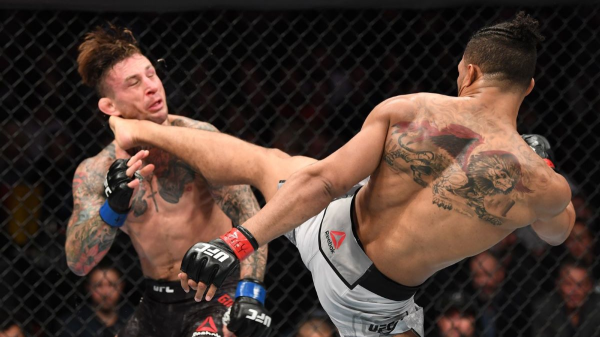 UFC Fight Night 170 on ESPN+ has a lightweight main event title fight that features Kevin Lee and Charles Oliveira. This showdown will be held at the Ginasio Nilson Nelson in Brasilia, Brazil, on Saturday.

We have the potential for outstanding ground action for this one.

You have similar fighters putting it all on the line. The odds for Lee and Oliveria are currently at:

Kevin Lee, also known as “The Motown Phenom” (18-5-0), is currently the eighth-best in the lightweight division. His notable record has eight wins by submission and seven by decision. With this in mind, he seems to be able to take any form to win.

Lee has a striking accuracy of 43 percent, with about 687 hits landed over his career. He has a grappling accuracy of 44 percent and a takedown average of 3.10 every 15 minutes.

In that same time frame, he has a submission average of 0.98. Lee also has a decent reach of about 77 inches.

Charles “Do Bronx” Oliveira (28-8-0) is ranked the 13th-best fighter within the lightweight division. His nickname is Portuguese for “the ghetto.”

He is on a five-fight win streak with his last two fights he won by knockout. In total, he has 18 wins by submission and seven by knockout.

This fight could go a few different ways. On one hand, you might get to see a fight with outstanding grappling and submission techniques.

On the other hand, you can possibly see a lot of stand-up action with knockout potential. Both of these fighters have the potential to take this fight either way and have the capability to last a lot of rounds.

Lee has a reach advantage of about three inches over Oliveira. He also seems to have a better takedown average and is able to work quickly in taking his opponents to the ground.

However, Oliveira’s submission average is much greater than Lee’s. This shows that once Oliveira can get his opponents on the ground, he is very quick to get that submission win.

With all of this in mind, you cannot ask for a better matchup of successful submission artists. I look for these two to come out aggressive and try to end the fight early, but they have the potential to slow it down.

I believe you will get to see the two of them showcase their talents on the ground. With that being said, I believe Charles Oliveira will be able to get the victory.

Oliveira should be able to earn his points, especially on the ground. He will be able to wear Lee down, even though he has a slight reach advantage, and work his presence inside the octagon.

One minor negative thing about Oliveira is that I do not think he will be able to submit Lee.

Lee has a solid takedown defense to start at 81 percent, so Oliveira will have to work to get him to the ground, but anything is possible. Oliveira has the experience needed to succeed for this one and should be able to go the distance for the decision victory.