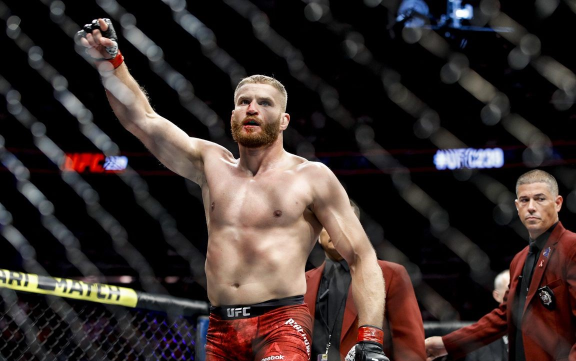 A Light heavyweight bout between Corey Anderson and Jan Blachowicz will be headlining UFC Fight Night 167. This main event will be taking place at the Santa Ana Star Center in New Mexico on Saturday. Both fighters have had some catching up to do since their first encounter in 2015.

The odds for Anderson vs. Blachowicz are currently at:

Corey “Overtime” Anderson (13-4-0) is currently the fifth-best fighter in the light heavyweight division. The 30-year-old has four wins by knockout and nine by decision, which shows he is a good strategy fighter. He has a 46% striking accuracy, a reach of 79 inches, and a 50% grappling accuracy.

His average fight time extends out to 12:07 minutes. The only drawback to his losses is that three of them have been by knockout.

Anderson lands about 4.37 significant strikes a minute and absorbs 2.20 a minute. This shows he has an aggressive striking ratio, which is good to have here.

He is a very well-versed wrestler but does not have any sort of a submission attempt. He does still take down his opponents with an average of 4.96 per 15 minutes. He has a nice takedown defense of 83%.

The 36-year-old Jan Blachowicz (25-8-0) is the sixth-ranked fighter in the light heavyweight division. Six of his wins have been by knockout, while nine have been by submission.

He has a 50% striking accuracy and a 52% grappling accuracy. He also has a 54% significant strike defense, which is a little lacking but not too concerning at the moment.

His significant strike ratio is not the best at all, but he has somehow successfully made it through his career thus far.

It seems the submission wins have been in his favor. His takedown defense is a little concerning, coming in around 61%. He has an average fighting time of 11:40 minutes.

You could almost bet that his next win is going to be either a submission or a decision, but he is very strong, and his knockout power should not be overlooked.

In their last meeting, Anderson landed 156 total strikes compared to Blachowicz 33. Anderson really laid it on Blachowicz once he figured out his pace.

Both fighters kept the fight standing most of the time, and had very limited ground time. Neither one of them had fully knocked each other down, but Blachowicz did try one submission attempt. Anderson managed to have four takedowns successfully out of four attempts.

For this time around, Anderson should keep a steady pace and look to strike when needed. He could recreate his victory and definitely work on a decision win.

Blachowicz has the potential to win, but he is going to have to ultimately knock out Anderson. This is very doable but definitely going to be tough.

I believe that Corey Anderson will repeat history, and he will win once again with his strong consistency in significant strikes and his extensive wrestling background.

If Anderson can steady himself in this fight, he has a very good chance at claiming a victory. Anderson wins by decision.