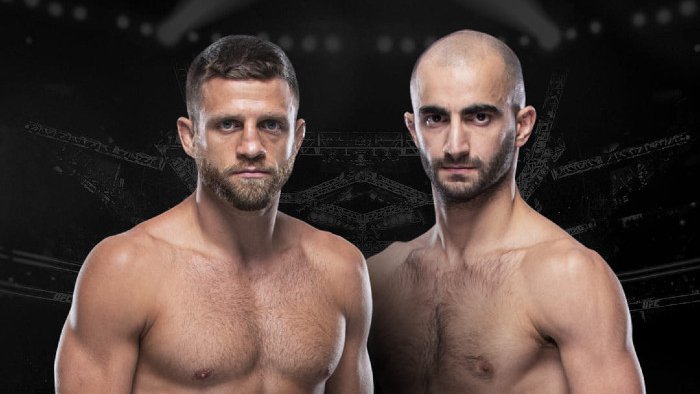 After a brief hiatus, the UFC will return with some mixed martial arts action on Saturday. UFC on ESPN 32 (also known as UFC Vegas 46) will take place on Saturday, Jan. 15 and will be headlined by a featherweight clash between the No. 5-ranked Calvin Kattar and No. 8 Giga Chikadze.

This will be Kattar’s first fight in nearly a year. Chikadze, meanwhile, enters the fight riding some of the hottest momentum in the division.

Here’s everything you need to know heading into the biggest bout on Saturday’s card.

All odds are via BetMGM.

For the second year in a row, Calvin Kattar will headline the first UFC event of the calendar. His last bout came in January 2021, where he lost via unanimous decision to Max Holloway in what was the fight of the night at UFC on ABC: Holloway vs. Kattar.

Kattar has now lost two of his last four fights after starting his career 20-3-0, so a win will be crucial if he doesn’t want to fall out of the top-5 featherweight rankings.

Meanwhile, Giga Chikadze has been trending in the opposite direction as of late. The 33-year-old is a perfect 7-0 since joining the UFC back in 2019 and has earned performance of the night honors in each of his last three outings.

His last three fights have been TKO wins, with the most recent being a victory over Edson Barboza in August 2021. A victory over Kattar would surely boost him up the rankings.

It’s too hard not to love what Chikadze has been doing since arriving in the UFC. Neither man has been knocked out before, so there’s a decent chance that this fight will go the distance.

Considering how Kattar has lost three of his last four fights that have gone to the judges, you have to like Chikadze’s odds in that scenario. Even if it doesn’t go the full length, it’s hard to imagine Katter knocking Chikadze out with how impressive the latter has been.

Tonight, the most pivotal game of the 2022 NBA Eastern Conference finals takes place in Boston, with the Miami Heat taking a 2-1 series lead into their matchup with the Celtics. In Game 3 on Saturday, the Heat took control early, outscoring the Celtics 39-18 in the first quarter and leading by as many as END_OF_DOCUMENT_TOKEN_TO_BE_REPLACED