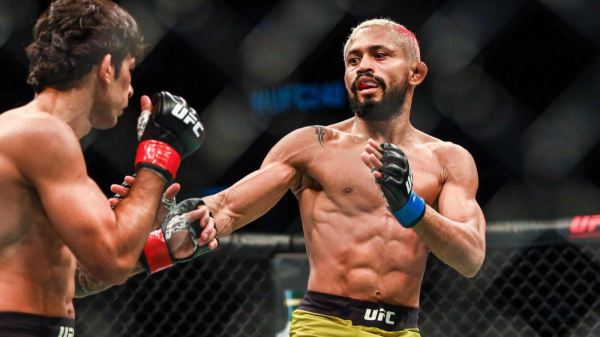 It’s fight night this Saturday in the UFC‘s Flyweight Division! The headliner at UFC 255 features defending champion Deiveson Figueiredo (19-1-0) vs Alex Perez (24-5-0). Perez stepped in for the fight after it was announced that Cody Garbrandt – who was the originally scheduled challenger – had sustained a torn bicep in training.

Figueiredo is favored in this bout despite both fighters being similar in height, weight, and reach. On the year, both fighters are at a 2-0 standing. Figueiredo finished his opponents by submission and by knockout in the 1st and 2nd round while Perez finished both opponents in the 1st round. Bettors seem worried Perez will be outmatched, as Figueiredo has defended his Flyweight belt twice this year, both times against Joseph Benavidez.

Some Other UFC 255 Props to Consider

This could certainly be a tricky bet as both fighters seem to fight aggressively. Unfortunately, the odds aren’t terrific for the Over/Under. Since the fighters are so evenly matched I’d expect the fight to last into the 3rd or 4th round.

Advice: Avoid betting for the fight to go the distance despite the juicy odds.

Figueiredo has the experience and skill to stay on top. He’s an MMA expert from Brazil that can grapple and has a powerful leg kick. Bettors are leaning towards another knockout strike to end the match. But Figueiredo defeated Benavidez in July by submission in the first round. A win by submission is certainly eye-catching especially at +420 odds.

Advice: Bet the champ to win by submission.

Perez is going to be seriously challenged in this match as Figueuredo is possibly the best fighter he’s ever faced. However, Perez quickly disposed of both opponents this year in the first round. Perez is a better fighter when he can grapple and wrestle an opponent. Fight experts are divided on the fight as both fighters have very similar styles.

Advice: Perez has been impressive this year and is riding a hot streak. Perez has the potential to upset Figueiredo. If you think Perez wins, you may want to bet on him to win via KO at +500.