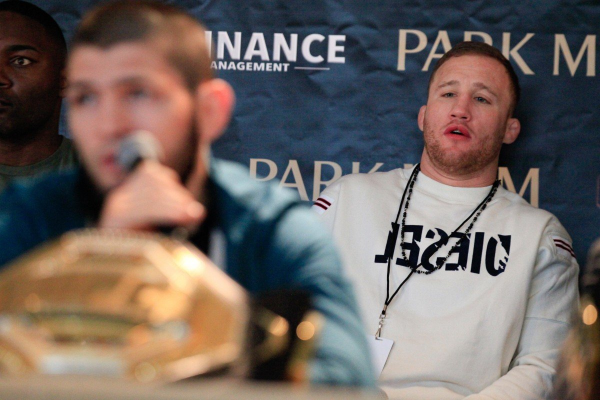 UFC 254 is going to be one of the most anticipated fights we have seen in recent years. The main event features two lightweight fighters that are at the top of their game, with Khabib Nurmagomedov squaring off against Justin Gaethje.

Khabib is returning after a COVID-19 diagnosis, and before that he death of his father. He is the lightweight champion, and Gaethje enters as the current interim champ for the division.

Khabib “The Eagle” Nurmagomedov is considered among the greatest, if not the best, pound for pound fighters in UFC history. With an undefeated 28-0 record in his MMA career, bettors are sure to be backing Nurmagomedov even after a long layoff.

His resume is packed with excellent wins, and the most appealing victory of his career was a dominating matchup against Conor McGregor. Fans have wanted a rematch but that will have to come another day.

Some people forget that Khabib is a decent striker, as it has been his wrestling that has turned him into an undefeated monster. It almost does not even appear fair when he controls the fight on the ground. Once he has an opponent on the ground for very long, UFC odds to win looks to be in his favor.

Gaethje is coming into this one as an underdog, but he is fine with that. Gaethje had  UFC betting odds of +150 when he upset Tony Ferguson for the interim championship. Gaethje is an incredible power striker, and has had a great career with a 22-2 record. He has 19 knockouts so far and his last 11 fights have ended in some form of a KO.

Gaethje, even though his resume is packed with knockouts, can end things early a multitude of ways. He has the foundations of a strong technical boxer with superb footwork in addition to having excellent use of leg kicks that set up combinations.

Even though his fights have shown that he prefers to keep things off the mat, Gaethje has a resume as an NCAA Division I All-American wrestler at Northern Colorado. That’sa huge asset against Khabib.

FanDuel has the main event UFC 254 odds currently placed at:

*odds are subject to changes

Gaethje unfortunately has one path to victory. He will need to keep the fight standing, mess with Khabib’s timing of takedowns with leg kicks, and be able to accurately deliver those powerful left hooks and right hands that dismantled Ferguson.

However, this is Khabib we are talking about here and that is easier said than done.

When looking at who is the better striker, obviously Gaethje would win this one. But the UFC is much more complicated than just who strikes better. Khabib has improved over the years but his overall complete fighting package is what makes him so great.

Khabib will definitely use the ground to win this fight, as always. Gaethje does have a solid takedown defense and might be able to avoid some of Khabib’s aggressive takedowns. But there is no way he will avoid all of them, and that is another point to make on just how aggressive Khabib is.