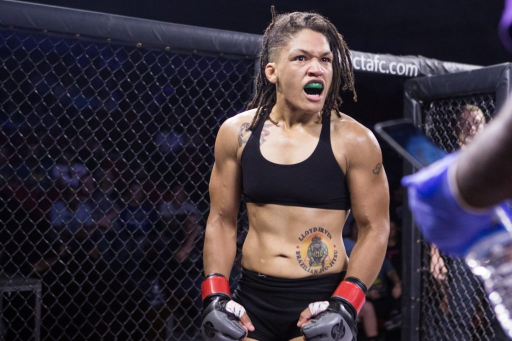 Sijara Eubanks will take on Karol Rosa on the Main Card at the UFC Apex center on Saturday the 5th of September.

The fight will take place in the UFC Women’s Bantamweight division and our full Betting Preview can be found below.

Eubanks is currently ranked #15 in the UFC’s Bantamweight division with a record of 3 wins and 2 losses in the promotion. She won a contract in the UFC with three straight wins in The Ultimate Fighter: A New World Champion. She beat Maia Stevenson (Sub), DeAnna Bennet (KO) and then Roxanna Modafferi (Dec).

Rosa is currently ranked the #16 Bantamweight in the world. She is 25 years of age and started training at the age of 13 at a Jiu-jitsu gym. She UFC Bantamweight is currently a brown belt in BJJ and dark blue in Muay Thai. Her biggest accomplishment is stated as beating the person that gave her her first loss in the Contender Series in veteran Gisele Moreira.

This is a very close fight whichever way you look at it and for those that are interested in MMA Betting, the odds makers have Karol Rosa as the -142 favorite for the fight with Sijara Eubanks the outsider at +116.

From a Method Of Victory point of view, the favored outcome for this fight is Karol Rosa winning via a decision at +155 and then Sijara Eubanks winning by the same method at +210.

Eubanks is predominantly a boxer who throws a lot of hooks and is willing to take a shot to give one. She is very tough and durable which is proven by her ability to go the distance in her fights. Every one of her fights inside the UFC promotion have gone the distance and her last six pro fights have needed the judges decision.

Rosa has a high output of striking and in particular her kicks. She is not afraid to box but she is suspect when standing in front of her opponent and throwing punches. Despite the fact that she does not seem comfortable standing in the pocket and exchanging, she does not shy away from it which is both a blessing and a curse. She throws good combinations but you can often see her flinching and falling for her opponents feints.

Rosa prefers to stand however her grappling is pretty solid and I give her the edge in this department. Without a doubt Rosa’s biggest strength lies with her leg kicking and her ability to stop her opponents in their tracks when they try to come forward.

Whichever way you look at this fight it does not scream ‘quality’. The odds reflect this uncertainty and the market has both girls as a winning chance. Eubanks will have the slight advantage when these girls are standing with her gritty, boxing style but she will in no way dominate this way.

If Rosa can keep her distance and use her leg kicks as a way to keep Eubanks at bay then she will score a lot of points with the judges. If the Brazilian can shoot for some take downs, and control some part of the fight on the canvas, she can steal a round or two.

The leg kicks will take a toll on Eubanks and she will be compromised the longer the fight goes.

As I mentioned, I don’t think either of these ladies has the skill or power to end the fight within the three rounds and the best betting play here is that the judges will be needed but I see Rosa winning a unanimous decision.

I recommend two separate betting plays in this fight and am confident on both plays.

4 Units on the fight going the distance at -220