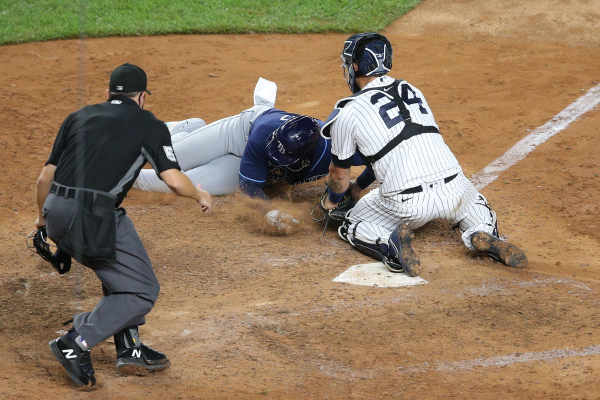 Each trending in opposite directions, the AL East’s two top teams meet at Yankee Stadium Wednesday for the third game of a three game set. After the Yankees won Tuesday night’s matchup 5-3, Wednesday’s matchup is a pick ’em, with both teams at -108.

Prior to Wednesday’s matchup, the Yankees had won 231 of the AL East franchise’s first 393 matchups. In 2020, however, the Rays have taken seven of the first eight bouts, accounting for half of New York’s losses in the COVID-19 shortened season thus far.

The Yankees sit 19-14, in a playoff spot but behind the Rays for the division lead. Both squads have suffered pitching injuries (like many teams in baseball this year) — The Rays currently have follower Ryan Yarbrough and relievers Nick Anderson and Jose Alvarado on the IL and the Yankees are without starters James Paxton and Luis Severino on top of bullpen arms Zack Britton and Tommy Kahnle. Charlie Morton, who came third in AL Cy Young voting in 2019, will come off the IL to pitch his fifth start of the season in Wednesday’s game.

Morton (1-1, 5.40 ERA) dominated in 2019, his first season with the Rays after signing a 30 million dollar, two year deal in Tampa. The New Jersey native posted a 3.05 ERA last season alongside elite peripheral numbers (11.1 K/9 and 2.6 BB/9) and the lowest home run rate in baseball (just .7 HR/9 allowed). Morton relies on primarily on a fastball, curveball combo that generates swings and misses at a high rate.

Slated to start for the Yankees is left-handed pitcher Jordan Montgomery (2-1, 4.44 ERA). Montgomery has allowed more than three earned runs in a start just once this season and held the Mets to just two ER in five innings pitched last time out. After starting 29 games for the Yankees in 2017 Montgomery has bounced from the IL to the bullpen to the rotation for the last few seasons but seems to be a mainstay in New York’s top five in 2020.

As a team that regularly platoons almost every position in their starting lineup, the Rays are well equipped to face a left-handed starter like Montgomery. Though Tampa just traded one of their best right-handed bats in Jose Martinez who regularly crushed southpaws, expect Ji-Man Choi to see more plate appearances against lefties. Choi is a natural left handed hitter, but dabbled with switch hitting at the beginning of this season before reverting to his previous stance. Without 1B/OF Martinez the Rays, who is now on the Cubs, may have to start a career .179 hitter v LHP against starters like Montgomery.

On the other side of the diamond is a bat who many thought could be traded at the 2020 deadline but ultimately was not — Clint Frazier. If New York was to go big game hunting for an arm like Mike Clevinger or even Lance Lynn, many though Frazier would have to be involved (the Yankees ultimately made no trades). After struggling to stay healthy and break into a stacked Yankees outfield the past few seasons Frazier has seized his opportunity in 2020, slashing .295/.415/.591 and hitting three home runs in just 14 starts. With Morton’s ability to keep the ball in the yard and some of the Yankees top power hitters on the IL, the Bronx Bombers will need mid-lineup bats like Frazier to slap some doubles to win the game.

Before the line was released I presumed the Rays would be slight favorites given the pitching matchup, and it is for that reason I will lean Tampa in this pick ’em game. Though the Rays project to be worse against left-handed pitching without Martinez they have a clear advantage with Morton on the mound — who should give them 4-5 strong innings coming off the IL.

Tonight, two pitchers whose records could use a little polishing match up as the St. Louis Cardinals welcome the Miami Marlins to Busch Stadium to open a three-game series. Cardinals hurler Adam Wainwright has not picked up a win since May 20, while Pablo Lopez’s win in his most recent start last week was his END_OF_DOCUMENT_TOKEN_TO_BE_REPLACED