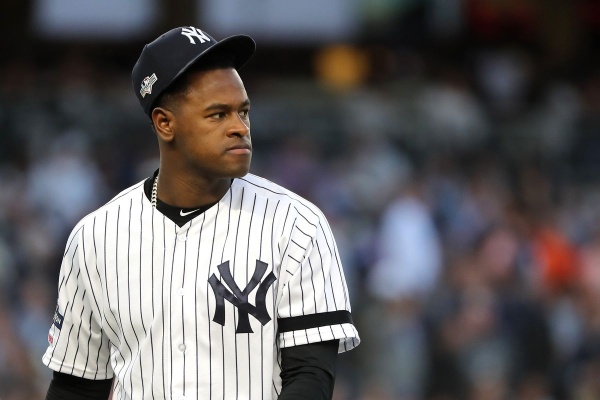 Spring training has only just begun, yet the Yankees have already taken a blow to their World Series hopes. After missing the majority of the 2019 season, star pitcher Luis Severino will require Tommy John surgery on his elbow.

Stemming from a partially torn ulnar collateral ligament, Severino’s injury and impending surgery will keep the 26-year-old sidelined throughout the 2020 season.

The procedure is scheduled for Thursday when Mets medical director Dr. David Altchek will perform the operation at the Hospital for Special Surgery in New York. The usual recovery time for Tommy John surgery is at least one year.

According to manager Aaron Boone, Severino had been dealing with discomfort in his forearm that began after Game 3 of this year’s ALCS.

Yankees fans started to worry once Severino was scratched from his second bullpen session in camp last week. The two-time All-Star then missed fielding drills for pitchers. Now, the fans’ and team’s worst fears have come to fruition.

Due to his forthcoming Tommy John surgery, Severino joins the list of Yankees pitchers who are set to miss time.

Domingo German was given an 81-game suspension for violating the MLB’s domestic violence policy. He still has 63 of those 81 games remaining, which means he could be eligible to return on June 5th.

New York will also begin the season without James Paxton. The combination of microscopic lumbar surgery and another procedure to remove a cyst will keep the lefty out through at least April, according to reports.

Now, the Yankees will be without Severino, whom they were excited to get back after a 2019 season in which he was sidelined.

All of the above makes the signing of former Astros starter Gerrit Cole that much more vital for this team. Cole was unhittable for parts of last season, going 20-5 with a 2.50 ERA while striking out 326 batters in the regular season.

In addition to Cole, the Yankees rotation will include J.A. Happ, Masahiro Tanaka, and a pair of openings to start the season. Last year, Happ was 12-8 with a 4.91 ERA, and Tanaka was 11-9 with a 4.45 ERA in the regular season.

On the bright side, the Yankees were able to prop up their pitching staff throughout the 2019 season with a deadly lineup. So, they’ll likely be ready to do so once again as they enter the 2020 season as AL East favorites.

Are Yankees Title Contenders Without Severino?

If the Yankees could have scripted the upcoming season, they would enter the postseason with one ace in Cole and another ace in Severino, who’d have a chance to find his 2018 form throughout the regular season.

Without Severino, New York can still be excited about the idea of Cole leading the rotation in October.

Still, the loss of Severino is big.

Depending on the sportsbook, the Yankees’ odds of winning the 2020 World Series are either unchanged or slightly lengthened due to the loss of the 26-year-old starter.

According to FanDuel Sportsbook, the Yankees are still the favorite to win the title with odds of +380. The Los Angeles Dodgers are right behind New York with odds of +400.

The Yankees’ win total line remains at 101.5 games, which means oddsmakers are expecting New York to have another great season.

However, any success the Yankees enjoy this year will likely have to come from their lineup once again. And if Cole can prove himself as one of baseball’s best pitchers again this season, New York will certainly be a title contender.