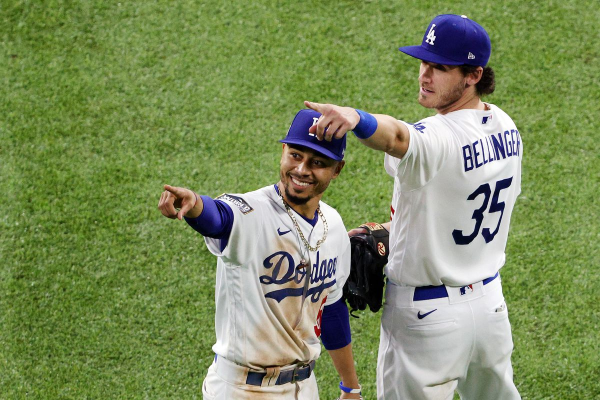 Game 2 of this matchup will be played on the 21st of October by 8:08 pm ET. The entire series will be played at Globe Life Field in Arlington, Texas following the COVID-19 regulations. Limited spectators will be allowed to help liven the atmosphere in the field.

The pitching matchup will feature left-hander Blake Snell for the Rays. The 2018 Cy Young Award winner will be given a chance to show just how good he is. The Dodgers will send rookie right-hander Tony Gonsolin to take a position on the mound. The Dodgers manager has also stated that he will also be supported by two other youngsters who will be available out of the bullpen, Julio Urias and Dustin May.

The whole Dodgers team outperformed the Rays and lead the series 1-0 after winning the game 8-3. Dodgers pitcher, Clayton Kershaw was at his best as he delivered six innings of one-run ball. He allowed two hits, one run, and struck out eight batters.

Rays pitcher, Glasnow was grossly inefficient but was kept in the game by Manager Cash hoping that the pitcher will give them one strikeout. He faced three batters, throwing a total of 112 pitches over 4.1 innings. His continued stay in the game led the Dodgers to open up a big lead at 4-1.

Rays will fight for a comeback but the Los Angeles Dodgers remain favorites with a Moneyline of -152 while the Tampa Rays sit at +132.

Dodgers Pressing on for another Victory

All parts of the Dodgers team worked like a well-oiled machine. Pitching, offense and defense were all top-notch; the opposite could be said for the Rays. Mookie Betts was also phenomenal, helping the Dodgers win game 1 in this best of 7 series with one outrageous play after another and they’d hope for a repeat performance from the team. However, the Rays will hope for improvement even as they do not have so much time between games to re-strategize.

Betts was out stealing bases all night in game 1 and he did that conveniently. The standout action was how he manufactured a run all by himself in the fifth inning. He drew a walk, stole second, stole third, and beat a throw home with a nifty, headfirst slide. He was undoubtedly the star of the night as he set a new record in the World Series. All 115 previous editions never witnessed a player have a homer, steal two bases, and score twice in a single game. Betts did exactly that in 116th.

Snell has a 3.20 ERA and 19 strikeouts with his four starts in the postseason. He, however, is known for his fastball that averages 98mph and a curve. He is a left-handed pitcher that relies primarily on his fastball. The Rays team will be hoping for the youngster to be at his best if they will stand a chance of winning game two.

The Rays have had an incredible run in the postseason and stand a good chance of making a comeback. This can be made possible only because of the depth they have in their squad, both in hitting and pitching. However, the only point of worry for the Dodgers team was having their offensive players live up to expectations. Their display in game 1 showed that they are ready for the task ahead which is why the Dodgers winning game two is more likely.

The Dodgers have started on an incredible note and it is unlikely to see them slow down. That said, it is wise to favor the Dodgers to win game two with the momentum they have going. However, it will be a close shave as the Rays pitcher will seemingly cause a lot of trouble for the Dodgers.

As we anticipate more of a closer contest, I will bet my money on the Los Angeles Dodgers to win with a margin of 1-3 runs.

Remember that this is the Dodgers’ third appearance in the World Series in the last four years; so they would be doubly delighted to win it this time. As for the Rays, this is their first time back in the World Series since 2008 as they will look to make an impression. They are as determined, if not more, to secure the title.