Twins Break Road Home Run Record, But Will That Equate To Postseason Success? 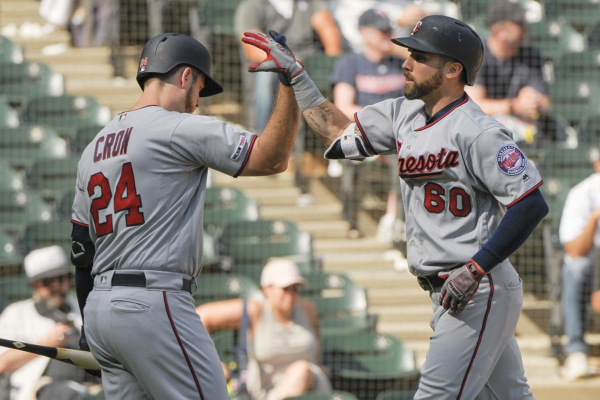 When the Minnesota Twins went into Chicago to play the White Sox on Thursday night, a seemingly normal August ballgame turned into Major League Baseball history. With three home runs in a 10-5 victory, the Twins set the new record for home runs on the road in a single season with 141.

The previous record, held by the 2001 San Francisco Giants, was surpassed when Jake Cave went deep to lead off the third inning, giving Minnesota its 139th homer away from home this season. Following Cave’s third-inning homer, C.J. Cron was next up at the plate and belted a dinger of his own.

In his second career multi-homer game, Cave then added the Twins’ third home run of the night in the seventh.

Minnesota can now set its sights on the single-season record for total home runs in a season. With 261 heading into the weekend, the Twins already own the third-most in MLB history.

With 264 home runs, the 1997 Seattle Mariners have hit the second-most. Last year’s New York Yankees currently hold the record with a total of 267 home runs.

So, with Minnesota claiming the record for homers on the road and within six of reaching the record for total home runs in a single season, will slugging power like baseball has never seen turn into postseason glory for the Twins?

Where The Twins Stand

Clearly, the home run power in the Twins lineup has put them in a great position to make the postseason. Even if the Indians manage to climb ahead in the division, Minnesota should be able to claim a Wild Card spot over the likes of Oakland (77-56), Tampa Bay (77-58), and Boston (72-62).

And there’s no sign Minnesota is slowing down. With seven wins out of their last 10 games, the Twins trail only Houston and its 8-2 record over that period. Minnesota can also claim an impressive run differential of +164, which was tied with New York for second-best in the AL.

Minnesota is very likely to see playoff baseball, and it’s slugging power that will get them there.

The Twins are ready to claim the title of best home run team ever, and it’s not because of any single player. Perhaps the most impressive part of this team is how many guys have home run potential.

So far, 11 Twins have hit at least 10 homers. Seven of Minnesota’s sluggers have hit 20 or more dingers.

Any opposing pitcher will know every batter in the lineup can go deep, so will that mean postseason success for Minnesota?

Are Record-Breaking Twins Destined for Glory?

Although the Twins are the best home-run team in baseball, the odds aren’t giving this club a great chance at winning the World Series. At +1650, Minnesota is barely ahead of Cleveland (+1850) and remains significantly behind Houston (+213) and New York (+425) in the American League.

In the National League, the Dodgers (+243) and Braves (+750) have better World Series odds than the Twins, who are even with the Nationals and Cubs at +1650.

Perhaps the biggest reason for Minnesota’s lack of World Series respect is its pitching staff. While the Twins have a scary lineup, pitching could become an issue once we get into playoff baseball, which normally shortens rotations to three or four starters.

While the Astros and Dodgers can boast starting rotations made for playoff baseball, the Twins’ best pitcher has been Jake Odorizzi, who’s only managed a 3.55 ERA to this point. Jose Berrios (11-7, 3.57 ERA) has been one of Minnesota’s most consistent starters, but he’s in the midst of an August slump with a record of 0-2 with an ERA of 8.44.

Although the Twins can hit the long ball better than anyone, their average pitching staff is why postseason glory remains more of a longshot than a reality.