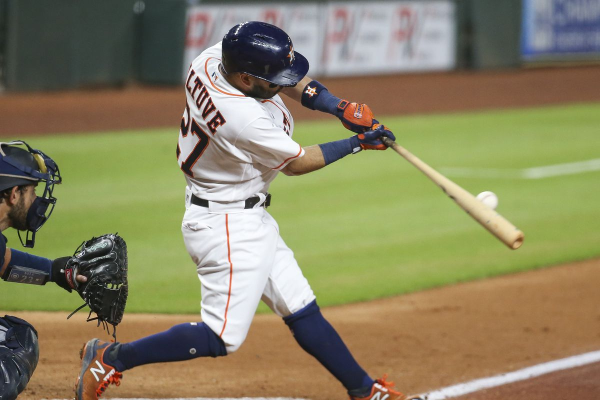 Wednesday night features an AL West showdown and an intrastate matchup as the Texas Rangers (13-21) take on the Houston Astros (19-15). This is the second of a three-game series between the two teams, and first pitch for Wednesday’s game is set for 8:10 pm ET.

On Tuesday, the Rangers took the opening contest 6-5 in extra innings after the Astros blew a one-run lead in the ninth inning. The Rangers’ Elvis Andrus tied it up with a solo shot in the ninth, and then the Rangers were able to take advantage of a balk and two errors in the tenth inning. In the loss, the Astros’ Michael Brantley had a three-run home run.

The Rangers come into this one in fourth in the AL West, trailing the division-leading Oakland Athletics by nine games. The Astros sit in second place in the division, three games off the lead.

The pitching matchup for this one features the Texas Rangers turning to left-handed pitcher Kolby Allard (0-3, 6.50 ERA) to take the mound against the Astros’ Christian Javier (3-1, 3.77 ERA).

According to Fanduel, the Astros are favored with a moneyline of -220 while the Rangers sit at +186. The spread sits at the Rangers +1.5, and the over/under for total runs scored is 9.

Offensively, Houston has had the stronger team in terms of runs scored. They rank fourth in the majors in runs per game at 5.33. The Texas Rangers rank dead last, averaging just 3.64 runs per game.

On the defensive side, it is once again the Astros who come out with the advantage. They rank 16th overall in terms of runs allowed per game at 4.64. The Rangers come in 26th as they are giving up an average of 5.39 runs per game.

After the struggles they have had this season, the Rangers would love nothing more than to ensure a series win by taking the second game on Wednesday. To do so, they will look to lefty Kolby Allard to lead them to a win. In his last outing, a 3-1 loss to the A’s, Allard went 5.1 innings allowing just one hit, two earned runs, four walks, and struck out five.

Offensively, the Rangers have had a disappointing season but have gotten good production from Isiah Kiner-Falefa. The infielder is currently hitting .286/.344/.375 with a home run, five runs batted in, 16 runs scored, and six stolen bases.

Astros Looking To Bounce Back From Loss

Between a hurricane, protests, and COVID-19 cases, the Astros haven’t played a lot of baseball lately. They have only played three games since August 25 (and two of those were a doubleheader).

With so many off days, the Astros looked a bit rusty Tuesday but will look to turn it around Wednesday against their Texas rival. To do so, they will turn to rookie Cristian Javier on the mound. This season, Javier is 3-1 in six starts (seven games) with a 3.77 ERA, 1.03 WHIP, and has 31 strikeouts in 31 innings.

Offensively, it was nice to see Jose Altuve have a successful night Tuesday. Despite the loss, Altuve had three hits and raised his batting average to .225. One player that has been scorching as of late for Houston is Kyle Tucker.

Astros Even The Series

While it is hard to rely on a rookie pitcher in Christian Javier, I like the Astros to take this game. They have hit lefties well, hitting .282/.353/.503 as a team with 16 home runs, 59 runs batted in, and 64 runs scored. Their .856 OPS ranks fourth in the majors against lefties.

Throw on top of their success against lefties that the Rangers are just not a great team all-around, and I like the Astros to bounce back in a big way in this game. I definitely like them straight up and would be tempted to take them to cover the -1.5 spread as well.

Tonight, two pitchers whose records could use a little polishing match up as the St. Louis Cardinals welcome the Miami Marlins to Busch Stadium to open a three-game series. Cardinals hurler Adam Wainwright has not picked up a win since May 20, while Pablo Lopez’s win in his most recent start last week was his END_OF_DOCUMENT_TOKEN_TO_BE_REPLACED