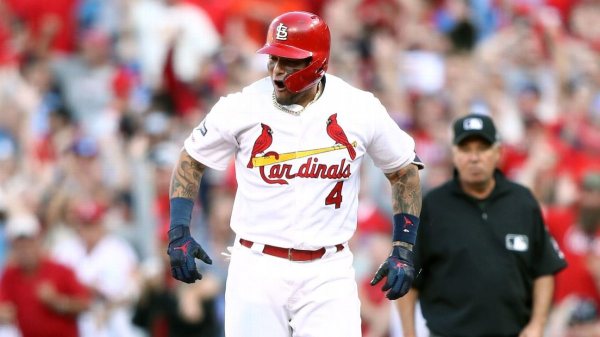 Only two losses separate the Cardinals from being knocked out of the playoffs, but St. Louis still has its aim set firmly on a spot in the World Series. If the Cards are able to recover from this 2-0 deficit in the National League Championship Series, it will be in classic, come-from-behind fashion.

There’s very little room for error for a St. Louis team that finds itself going into Washington for Game 3 of the NLCS after dropping both home games to start the series. And while the Cardinals won’t be panicking yet, a third game of offensive ineptitude would surely sound the alarms.

Thus far, the Cardinals have failed to earn a hit through the first six innings of either game. Knowing that statistic, it’s no wonder St. Louis has only managed to score one run through two games.

With the bats in St. Louis’ lineup, it’s hard to believe they’ve only racked up four hits so far in the series, but that’s exactly what’s happened.

Now, the Cardinals will need the likes of Paul Goldschmidt and Marcell Ozuna to step up in the third contest between these two teams.

If a comeback is in the cards, it likely starts Monday night in Game 3 of the NLCS.

With the Dodgers and Braves earning the top spots in the National League heading into the postseason, neither the Nationals or Cardinals were supposed to make it this far. Yet here we are, already through two games of the NLCS with St. Louis clinging to the cliff’s edge.

And if the Cardinals are to begin an NLCS comeback Monday evening, they’ll have to do so against one of the league’s better pitchers.

The Nationals are seeking series dominance, and they’ll be confident with right-hander Stephen Strasburg (18-6, 3.32 ERA) on the mound. Strasburg now has a 1.32 ERA in six career postseason games, but he did give up a pair of home runs in Game 5 of the NLDS.

Hoping to claim their first win of the series, the Cardinals will send out right-hander Jack Flaherty (11-8, 2.75 ERA) to start. Flaherty earned the win in Game 5 of the NLDS matchup against the Braves, but there was little pressure after his lineup racked up 10 runs in the top of the first inning. Still, Flaherty only allowed a single run in six innings.

Although the Cardinals were the lowest scoring of all five National League playoff teams, they showed their offensive prowess by taking down the Braves in Game 5 of the NLDS on the back of a 10-run first inning.

St. Louis will need to recall some of that firepower Monday night if they’re going to avoid an 0-3 start to the NLCS.

Do The Cardinals Stand A Chance?

An NLCS game will never be easy, and it doesn’t get any easier with Strasburg on the mound. However, the Cardinals have already shown a resilient spirit that disallows us from ever counting them out.

Focusing on Game 3, the Nationals are -126 favorites to win the ballgame. While that makes the Cardinals the underdog, it’s certainly not relegating them to longshot status.

To win the National League Pennant, the odds look much bleaker for St. Louis. With the goal of winning the NLCS, the Nationals carry -775 odds, while the Cardinals are sitting on +450 odds with two games having already been played.

At this point in the series, a comeback would be a surprise but not a shock. But if the Cards let Game 3 slip away, the odds will be virtually insurmountable.