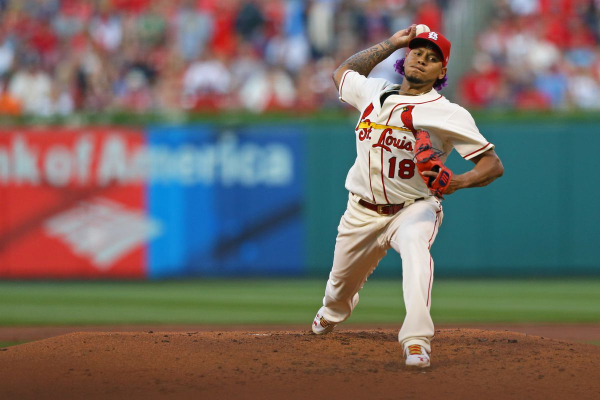 The first series is in the books for teams around Major League Baseball, and now teams have to settle in for an intense, short-season ahead. With the season cut to almost a third of its normal length, every game and every series are crucial for postseason hopefuls.

On Tuesday, a pair of these postseason hopeful teams will square off in an interleague showdown as the St. Louis Cardinals (2-1) will travel to Target Field to take on the Minnesota Twins (2-1). Both teams are enjoying an off day on Monday before squaring off on Tuesday.

For Tuesday’s game, the Cardinals will send Carlos Martinez to the bump to take on righty Homer Bailey of the Twins.

Cardinals Look To Martinez In Return To Rotation

Between health concerns and a need at the back end of the bullpen, Carlos Martinez has not been the premier starter that many anticipated early in his career. Still, the 28-year-old is excited to be back in the rotation and hoping to put in a complete, healthy season this year.

Offensively, the Cardinals got a nice opening weekend from shortstop Paul DeJong. In three games, he went four for ten with a home run, four runs batted in and a double. He wasn’t the only redbird that homered in the opening series, though, as Paul Goldschmidt, Tyler O’Neil, and Dexter Fowler also went yard.

DeJong will be someone to keep an eye on in Tuesday’s game as he has a history of success against Homer Bailey. In his career, he is hitting .400 in 15 at-bats, including two home runs and five runs batted in.

Twins Keep Showing They Can Score In Bunches

The Minnesota Twins set a major league record in 2019 with 307 home runs. In 2020, they appear to have not lost a stride. In the first three games of the season, against the Chicago White Sox, the Twins scored 27 runs and hit seven home runs.

One of the biggest contributors over the weekend was the ageless wonder, Nelson Cruz. The 40-year-old designated hitter went seven for thirteen with two doubles, three home runs, and a whopping ten runs batted in during the three-game stretch. His current batting line is a ridiculous .538/.571/.1.385.

Also contributing over the weekend was outfielder Max Kepler. The right fielder only had two hits, but both of them left the yard. Between Cruz, Kepler, Josh Donaldson, Jorge Polanco, Mitch Garver, and others, there aren’t many holes in this lineup.

On the pitching side, the Twins will send veteran Homer Bailey to the mound on Tuesday. Last season, the 34-year-old split time between the Royals and Athletics, where he went a combined 13-9 with a 4.57 ERA, 1.32 WHIP, and struck out 149 in 163.1 innings. While Bailey is hardly an ace, he is a veteran who generally does an excellent job of giving his team a chance to win each time he goes out.

My Bet Is On The Twins’ Offense

While I think Carlos Martinez has the better stuff of the two starting pitchers, my reservations with him are that I don’t know how deep he can go in a game. Given he didn’t start a single game last year, I am not sure how deep he will be able to go, especially when you think of the vaunted lineup he has to face.

Homer Bailey will probably give up some runs himself, but I think he will ultimately be able to do enough to keep the Cardinals’ lineup in check for the Twins’ offense to take care of the rest.

Because of the pitching, it is a bit of a coin flip to me; however, in the end, I think I like the Twins a bit more in this one straight up. I am taking the Twins at home.