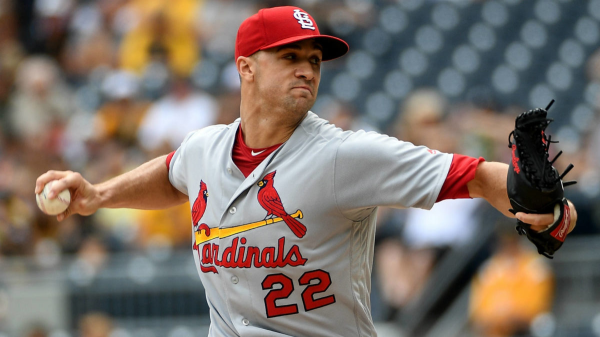 Thursday night features a battle of National League Central rivals with the division title up for grabs as the St. Louis Cardinals (85-67) travel to Wrigley Field to take on the Chicago Cubs (82-70). As it stands now, the Cubs sit just three games behind the Cardinals for the division race making it fitting that seven of the last 10 games of the season pit the two historic rivals against one another.

There is a lot of drama in the NL Central since either of these teams could take control if they are able to dominate in those seven games, and if they split, then it may leave the door for the Brewers — also just three games behind the Cardinals — to sneak in. Regardless, it will be a playoff atmosphere Thursday as the Cardinals’ Jack Flaherty (10-8, 3.05 ERA) takes the mound against the Cubs’ Kyle Hendricks (11-9, 3.26 ERA). First pitch for this one is scheduled for 7:15 pm ET.

The moneyline for this matchup features both the St. Louis Cardinals and the Chicago Cubs at -110.

Cardinals Try To Finish The Job

With a three-game lead in the division, the Cardinals desperately would love to put away the division by winning this first series against the Cubs. To do so, they turn to Flaherty on Thursday. On the season, Flaherty is 10-8 in 30 starts with a 3.05 ERA, 1.03 WHIP and opponents are hitting just .203 against him. In 174 1/3 innings, the right-hander has allowed 129 hits, 59 earned runs, 24 home runs and has struck out 206 versus 51 walks.

Cubs Trying To Use Home-Field Advantage

The Cubs have been especially dominant at home this season, going 51-26. Trying to protect their home field on Thursday will be Hendricks. On the season, Hendricks is 11-9 in 28 starts with a 3.26 ERA, 1.12 WHIP and opponents are hitting .245 against him.

In 165 2/3 innings, Hendricks has allowed 154 hits, 60 earned runs, 19 home runs and has struck out 139 versus 31 walks. In his last outing, a 14-1 win over the Pirates, Hendricks went six innings, allowing seven hits and one earned run while striking out two.

The Cubs have taken quite a hit by the injury bug lately. Not only is infielder Javier Baez out but so too is Anthony Rizzo for the immediate future. For that reason, players like Kris Bryant and Willson Contreras will be asked to pick up the slack.

This should be a thoroughly exciting matchup, particularly on the pitching side. Flaherty has been one of the most dominant pitchers in baseball since the All-Star break, while Hendricks is 3-0 against St. Louis this season. Hendricks has also pitched to a 1.75 ERA at Wrigley this year and a 1.53 ERA in his last three starts.

Taking all of those things in perspective and the must-win feel this game has for Chicago, I like the Cubs to win the opener despite going against a solid Flaherty. I understand why people would be willing to bet on either side in this one, but for my money, I am taking the Cubs at -110.