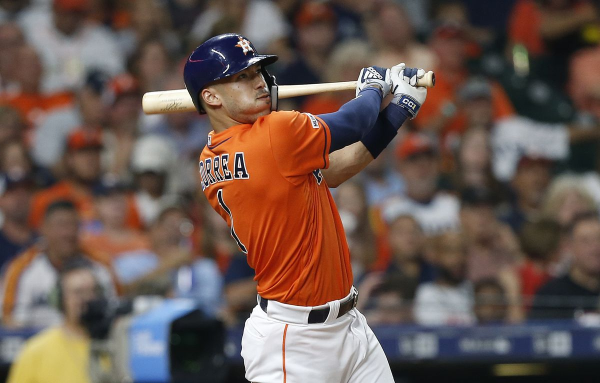 It is an American League West matchup of worst versus first on Saturday when the Seattle Mariners (47-65) take on the Houston Astros (71-40) at Minute Maid Park.  For the Mariners, it has been a long season.  Since starting the season on fire, the Mariners have fallen to almost 20 games under .500 and currently sit 24.5 games behind the Astros for first in the AL West.

For Houston, they come into this series with a lot of buzz after a trade deadline that saw them come away a better team than what they started (which was already pretty good).  The pitching matchup will feature one of those trade acquisitions as Aaron Sanchez (3-14, 6.07 ERA) makes his Astros debut against the Mariners’ Marco Gonzales (12-8, 4.21 ERA).  First pitch for this contest is scheduled for 7:10 pm ET.

The moneyline for this game features the Seattle Mariners at +180 while the Houston Astros come in at -200.  The over/under on runs scored is set at 10.5.

On the offensive side, these two teams have been relatively close from a production standpoint.  Houston currently ranks eighth in the majors in runs per game at 5.21 (5.17 at home). For the Mariners, they come in just a handful of spots behind at 12th, averaging 5.01 runs per game (5.04 on the road).

Mariners Looking To Save Face

In usual Jerry Dipoto fashion, the Mariners’ GM was able to swing several trades at the deadline, notably trading Mike Leake, Hunter Strickland, and Roenis Elias.  All of the trades were done with an eye on getting better for the future. Still, the Mariners still have to play out the games this season and will look to Marco Gonzales to try to even the series at one game apiece.

Another player who has hit well is Domingo Santana.  He is hitting .270/.342/.477 with 21 home runs, 67 runs batted in and 61 runs scored.  Many thought he could possibly be traded, but he will instead look to help the Mariners offense against the righty Sanchez.  Against the Astros’ pitcher, Kyle Seager is hitting .375 in eight at-bats with a home run, and Mallex Smith is 2 for 4 against him.

Jeff Luhnow is starting to have a knack for making the big trade.  In fact, the trio of aces in Justin Verlander, Gerrit Cole and recently acquired Zack Greinke all came to Houston via trade.  While Greinke made the headlines, a smaller trade that brought in Aaron Sanchez, Joe Biagini and a prospect may also pay big dividends.

Sanchez will get the start on Saturday, and while he has struggled thus far this season, he is the type of pitcher that pitching coach Brent Strom has been able to maximize in the past. Still, it is hard to look past the 3-14 record, 6.07 ERA, and 1.69 WHIP.  An All-Star as recently as 2016, Sanchez will look to start fresh with his new club starting on Saturday.

Offensively, this team is scary, especially now that they are starting to get healthy.  While he was plagued with injuries early in the season, Jose Altuve is finally starting to look right.  In the last six games, he is hitting .522/.621/.826 with two home runs, six runs batted in and six runs scored.

Another player who has been sizzling since being called up is Yordan Alvarez.  In just 39 games, he is hitting .336/.421/.699 with 13 home runs, 39 runs batted in and 24 runs scored.  Throw in players like George Springer, Alex Bregman, Michael Brantley, Carlos Correa, and Yuli Gurriel, and this is one of the most dynamic and intimidating lineups in the majors.

While I do think Aaron Sanchez will improve with the Astros, it is hard to imagine that will happen immediately.  Still, Marco Gonzales is not exactly an ace.  In fact, the Astros have seven players on their roster hitting .300 or better against him.  This one may ultimately be a slugfest and come down to the bullpens.  With that in mind, I have a hard time betting against the Astros.  With a favorable moneyline, this might be the game to take a chance on the Mariners (they face Justin Verlander Sunday), but for my money, I am taking the Astros at -200.