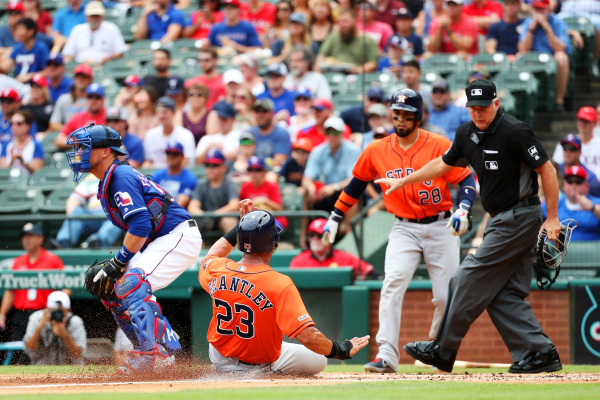 “We’re still trying to obviously win games. That said, I’m trying to obviously get these guys at bats.” That came from Rangers manager Chris Woodward as he discussed the plan for the remainder of the season. The Rangers are 18-31 and completely out of the race, therefore they’re throwing up a bit of a white flag even though they won’t admit it. That should present an opportunity Thursday for the Astros, who have been disappointing this year at 24-25, but not disappointing enough to miss the playoffs. Houston currently sits in 2nd place by 2 games over the Mariners in the AL West, so they’ve got playoff odds over 97%.

These are the neon red signs sports wagering pros look for! The Astros are trying to win. The Rangers are (kind of) trying to win. Houston is -120 on the run line at -1.5. They’re a hefty but not overwhelming -250 on the money line. The over/under for the game is 9.5 with the over at -120 and the under at -103. (DraftKings)

There’s good news and bad news for the Astros starter, Framber Valdez. He’s been struggling of late, having allowed 13 runs over his last 2 starts. One of those starts was against the Dodgers, so it’s excusable. Despite allowing 5 runs, his strikeout total was still high as he made 7 Dodgers whiff through 5 innings. The prior start against the Angels was just bad, striking out just 2 and coughing up 8 runs in 7 innings. So, the good news? Well the last time Valdez pitched well, it came against the Rangers. Maybe their presence can help get him back on track. He had been pitching really well in the 4 starts prior to his recent southern California follies. The Rangers strike out a fair amount and Valdez is a strikeout pitcher. It’s a strong matchup for the Astros if they get the August version of Valdez.

I’m wildly confident in one thing in this game: The Astros are going to hit. Jordan Lyles is throwing for the Rangers, and the Astros won’t need to know what’s coming, because whatever it is it won’t have much on it. The last time Lyles gave up less than 3 runs in a game was his very first outing of the year, which was a 2 inning stint against the Diamondbacks in July. Since then, he’s appeared in 8 games. He’s allowed 4 runs or more in 6 of those outings. The Astros need the win and they’re the better team. It’s a rubber match at home and they’re facing a right hander with an ERA of almost 8. The Astros have numerous advantages in this game, making the -250 money line bet a consideration, even though it is the biggest number on the board for Thursday’s MLB slate.

I Come From a Land Down Under

I just gave you one angle that leans toward the over, and another that slants toward the under.

So which is it? Take the under! Yes the Astros are likely to put up a good number of runs in this game, but I go back to the quote at the top of the page here. The Rangers aren’t focused on putting their best team out there, they’re focused on getting at bats for young prospects. Young players strike out a lot, Valdez is a strikeout pitcher. Put those facts together and I don’t think the Rangers score more than 1 run. That’s the total they’ve pushed across in each of the first two games in the series.

I like the under 9.5, I’d be comfortable playing the money line, but the run line is the better option as this one should go heavily in Houston’s favor. For a fun prop bet, take the Astros over 5.5 runs at -105, which could help you hedge the under bet if you take it. You have a great chance to get lucky and win both.