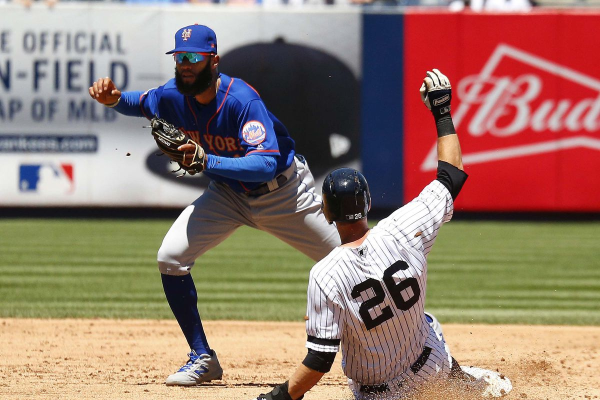 The New York Yankees and New York Mets resume Subway Series action on Thursday, Sept. 3 at 4:10 p.m. at Citi Field in a one-off matchup between other series. The New York foes just completed four games this past weekend, which the teams split evenly, two wins and two losses apiece. When action resumes in Queens, J.A. Happ will be on the mound for the Yankees. The Mets have yet to announce a starter, although there are two possibilities: A bullpen game or Michael Wacha.

DraftKings and FanDuel will likely release odds that favor the Yankees behind Happ, who’s had two solid starts heading into this matchup.

Happ’s last start came against the Mets – he went 7.1 innings, allowing three hits, no walks and no runs while striking out five. He induced 10 groundball outs and only five flyouts, which bodes well against a Mets lineup built for power and not speed. Happ’s prior time out saw him allow only one run.

The big question with Happ here is whether he can repeat his standout performance in a second-straight matchup against the same team. From a platoon perspective, Happ has an advantage against the Mets, who will likely start left-handed hitters Brandon Nimmo, Michael Conforto and Jeff McNeil near the top of the order despite Happ being a southpaw. As long as Happ can work around Pete Alonso, who has been cold anyway, there’s not a huge threat to him anywhere in the Mets’ lineup.

That said, Happ has actually been better against right-handed bats than lefties this season. Left-handers have hit .200 against him while righties have batted .184. Neither of those are high enough averages to worry about Happ.

When it’s not Jacob deGrom, which it won’t be Thursday, the Mets have struggled getting any success on the mound. Michael Wacha just returned from the Injured List and made a start last week, allowing four runs in just 3.0 innings pitched against the Yankees. He likely isn’t stretched out enough or effective enough to cause any worrie if he gets the ball.

Aside from Wacha, the Mets could start one of two relievers they’ve used as openers, Robert Gsellman or Seth Lugo. Both have been stretched out to be able to pitch three or four innings, but neither would likely last long enough to earn a decision. Lugo is the most effective of the bunch, while Gsellman did hold the Yankees to one run in 4.0 innings pitched last week.

Considering Thursday’s game wasn’t originally on the schedule and is a make-up contest, the teams could each try to get length out of their starting pitcher and conserve their bullpen. Happ is more suited to do that than a spot starter/opener for the Mets, so that should give the Yankees another edge.

Happ goes through stretches of great performance in his career only to fall off and struggle for long periods, too. Thankfully for Yankees bettors, Happ has just started to put it together in this shortened season and should continue his winning ways. Any line that sees the Yankees favored by even a few runs is worth taking with Happ on the mound.

There’s also merit to betting the over in this matchup. While Happ is probably good enough to beat the Mets, it’s fair to expect them to hit him better the second time they see him in as many weeks. The Yankees’ lineup has been ravaged by injuries, but the Mets won’t put anyone on the mound who’ll stifle the Yanks’ bats. In a lot of ways, it’s like a Yankees game of old – they’ll score a lot of runs and come out on top.

Tonight, two pitchers whose records could use a little polishing match up as the St. Louis Cardinals welcome the Miami Marlins to Busch Stadium to open a three-game series. Cardinals hurler Adam Wainwright has not picked up a win since May 20, while Pablo Lopez’s win in his most recent start last week was his END_OF_DOCUMENT_TOKEN_TO_BE_REPLACED