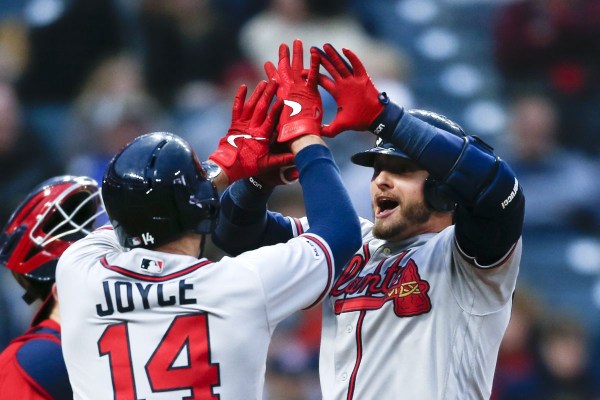 Saturday night features a matchup of NL East rivals as the second-place Philadelphia Phillies (38-31) take on the first-place Atlanta Braves (41-29) at SunTrust Park. This will be the second of a three-game series. The opener was a wild one, with six home runs hit between the two teams. Even wilder was the ninth inning, though. The Phillies came into the ninth with an 8-6 lead but left losing by one after the Braves scored three including the game-winning hit by Brian McCann, a two-run single to left.

The moneyline for this one features the Philadelphia Phillies at -104 and the Atlanta Braves at -106. The over/under for total runs scored is set at 9.

Offensively, these two are pretty similar. The Braves come into this one ranked 10th in the majors in runs scored at 5.17 (5.46 at home). For the Phillies, they come in just a handful of spots behind at 15th, averaging 4.87 runs per game (4.52 on the road).

On the pitching side, it is the Phillies that just edge the Braves overall. Philadelphia ranks 10th in the majors with a team earned run average of 4.26 (4.35 on the road). The Braves come in right behind with an ERA of 4.29 (4.54 at home).

When you put it all together, the two NL East rivals are neck and neck in run differential. The Braves rank 11th in the majors with a run differential of +25 while the Phillies come in 13th at +20.

Philadelphia Wants Back On Top

After holding the top spot in the NL East for much of the early part of the season, the Philadelphia Phillies are looking to inch their way back to the top of the standings. Unfortunately, June has not been kind to them thus far as they are 5-7 but Saturday’s starter, Aaron Nola, will try to stop the bleeding.

Offensively, Jay Bruce has certainly enjoyed his trade to the Phillies. After being dealt to the Phillies, he is batting .324/.359/.784 in 10 games. During that time, he has five home runs, 13 runs batted in and nine runs scored. He has been a huge addition to the team, particularly after they lost Andrew McCutchen for the season to injury.

One player they are still waiting to explode is Bryce Harper. Thus far, he is hitting .249/.353/.471 with 12 home runs, 48 runs batted in and 40 runs scored. While those numbers are certainly nothing to scoff at, the Phillies probably hoped for even more from him. He does get a nice matchup against Newcomb on Saturday, a pitcher he is 3 for 9 against with two home runs.

Especially after seemingly stealing one on Friday, the Braves would love to use their momentum to win the series on Saturday night. To do so, they will send Sean Newcomb to the mound. On the season, Newcomb is 1-0 in 19 games (three starts). In 31 1/3 innings, he has a 2.59 ERA, 1.34 WHIP and opponents are hitting .258.

In that time, he also has allowed 32 hits, nine earned runs, two home runs and has struck out 26 versus 10 walks. It is worth noting that this will be his first start in a while after working primarily out of the bullpen since coming back from the minors. As a result, he may be on a pitch count for the Braves.

Also hitting well over the last month has been rookie Austin Riley. He is hitting .294/.336/.596 with nine home runs, 29 runs batted in and 21 runs scored in the last 30 days. Between these two and players like Ozzie Albies, Ronald Acuna Jr, Nick Markakis, Josh Donaldson, and others, this is a very loaded Braves lineup.

As the moneyline indicates, there doesn’t seem to be a clear advantage in this one. On the pitching side, I like Nola over Newcomb, but I also think that the Braves have the momentum coming off of the disheartening loss for the Phillies on Friday.

It truly would not shock me if the game went either way, but for my money, I like the Braves to keep rolling on Saturday. With Newcomb on a pitch count, the bullpen, which has had question marks throughout the season, will have to pick up some of the slack, but I think the Braves will be able to outhit the Phillies in this one.