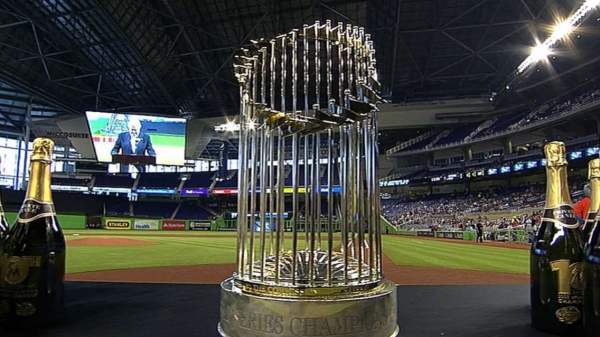 In beating the Tampa Bay Rays to win their first World Series since 1988, they confirmed their winning approach, making it easy for them to be the odds on favourite to win it again in 2021. Repeating as champs is difficult, but this team is loaded.

Even though they are being pushed in their own division by the San Diego Padres, it is hard to imagine that they will fall the way the Washington Nationals did this season. Making it back to the playoffs is the first step to repeating, and that feels like a given for L.A. In reviewing the World Series winning odds below.

The only surprise at the the very top is that the Yankees are right there with the champs. New York had a very good team this season, but there are so many questions, especially in the rotation, that I thought there would be a gap. Here is a scan of the early odds and some thoughts for consideration.

Looking at teams starting from the bottom, one thing stands out. The Marlins are at +5,000 after making the playoffs this season and eliminating the Chicago Cubs. There are four teams with lower odds than Miami that did not even make the playoffs this year. The question is whether that says more about the Marlins than those teams. I think the former.

Odds are that over a longer season Miami would not have been able to keep up their level of play. I agree with that, though I am not sure where you put the Cubs on this list. Miami dispatched them with ease and it looks like their window is slamming shut.

In looking at the bottom tier of teams, only one stands out that, without knowing all of the coming offseason transactions, could possibly be playoff worthy in 2021. That is the Colorado Rockies at +6,600. The Rox started the season well and then fell apart. They have some pitchers who showed a little progress though, and some of their hitters with really strong track records just never found their form in the short season. Their greatest challenge are that the Dodgers and Padres are in the same division. Just making the playoffs will be tough.

The teams at +4,000 to +5,000 are an interesting group. For starters, you have the Boston Red Sox, a big market club that had one of its worst seasons in history. You can slap an asterisk next to this season if you want, but they haven’t had that low a winning percentage since the 1930s. The club does not tolerate losing, and the last time they finished last the AL East, they went on a run of three straight division titles culminating in a World Series title in 2018. Just five years before that, they went from last in the division to the World Series championship the next. The key for them will be investing in pitching and staying healthy. They had neither of those things this season.

The Angels are in the predicament of being a large market, big money team that doesn’t seem to know how to spend that money. It is great that they locked up OF Mike Trout for the long term, but they have been unable to surround him with enough talent to compete. The Dodgers cast a very big shadow, yet the thuds of Angels are still pretty loud. They have made the playoffs only once in the last decade. Breaking that streak, let alone going on a World Series run, seems unlikely.

The Toronto Blue Jays and Milwaukee Brewers are the other teams you can get in that range. The Brewers have been in the playoffs recently but it kind of feels like their window is closing, especially if OF Christian Yelich doesn’t return to elite status. For Toronto, they were ahead of schedule this season with a young core that has yet to fully develop. If 1B Vlad Guerrero Jr. takes a step forward next season, they make the AL East even deeper. A World Series is still way off though.

Just up the list you have a group of teams that are going to be very interesting next season. The one’s that have caught my eye are the Philadelphia Phillies at +3,000 and the Cleveland Indians at +2,200. The Phillies need a little more health luck, but they look primed to compete with Atlanta in the NL East. They have a nice 1-2 punch in the rotation and a good lineup. Cleveland made a quick exit in the playoffs this fall but they still have the best starting pitching in the game. As we saw in the World Series, that can still make a difference.

Closer to the very top, the Padres and Chicago White Sox are intriguing. San Diego broke through this season and they look like a team that can be in it for the long haul. They battled pretty well in the playoffs, considering they were missing their two best starting pitchers. Chicago fired their manager because they think they have the talent to win now, and need a guy who can get it done. They are intriguing, especially because the top of the AL is more wide open.

2020 is in the books, and what a memorable season it was, for a variety of reasons. The playoffs were super exciting, bubble or not, so how can we be blamed for looking ahead so soon? There will be lots of moves made, both on and off the field. These odds are just the initial reference point for finding the right future values. It is always fun to see how rumours, new and transactions move them and provide opportunities to pounce.

After extending their hot and San Diego’s cold streak, the Seattle Mariners will be looking to leave Petco Park with a two-game sweep as they take on the Padres this afternoon. Yesterday, the Mariners pounded out a dozen hits and plated eight runs, and Chris Flexen pitched 6.2 shutout innings to collect his third straight END_OF_DOCUMENT_TOKEN_TO_BE_REPLACED