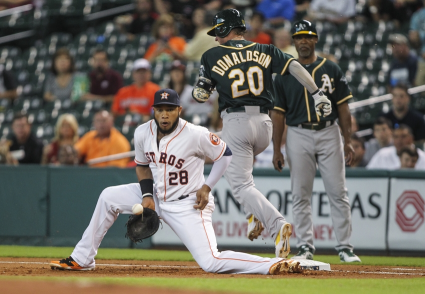 The Athletics and Astros face off on Sunday following a Saturday doubleheader, in which the Astros took both games. Fanduel sportsbook has today’s match-up as a pick em, as the Money Line is -108 either way.

The Astros will send left handed Framber Valdez to the mound. The 26 year old has an impressive 2.35 ERA on the season over the course of 38 and a third innings pitched. He faced off with the Athletics on August 8th, a game that he wound up taking a loss in despite allowing just one earned run over the course of 7 innings pitched. He spread out 7 hits allowed in his 7 innings, with the lone earned run against him coming off of a 1st inning solo shot off the bat of Marcus Semien. After that opening at bat, he locked in and pitched an impressive game.

The Athletics will be taking the field behind Jesus Luzardo, the 22 year old left hander who has appeared in 13 games in his MLB career. This season, Luzardo has an ERA of 3.74 over his 33 and two thirds innings pitched for Oakland. He faced off with the Stros on August 9th, picking up a win after going 5.2 innings and allowing two earned runs.

Neither starter stands out significantly when comparing them directly, but there’s a little bit more to factor in. The Athletics have used their bullpen more heavily entering this game, as they used 5 bullpen arms during yesterdays double header. In total, those 5 pitchers threw 90 pitches yesterday, meaning they’re all unlikely to be used in todays game if needed. The Astros, on the other hand, used a total of 3 bullpen arms, who got their work done on an efficient 31 pitches, with none throwing more than 12 pitches.

Who has the momentum?

Both teams enter this game 6-4 over their last ten games. Houston currently trails Oakland by 2.5 games in the AL west, though, giving this series an extra level of importance. As we all know, every game is crucial in this shortened season. Given the level of importance, and the two teams in this game, the edge must be given to Houston due to their experience and proven ability in the moment. They hold the slight edge when it comes to the pitching matchup, they’re coming off a two win day against this same opponent, and they are starting to tune things up to make a push toward the end of this season.

As a toss up in terms of the ML, it’s hard to find value going anywhere else besides Houston. Take them, at the money line, and be confident in the more talented, experienced team prevailing.

The Over/Under is at 8.5 on Fanduel, a line that’s not as appealing as the Money Line is favor of Houston. If forced. lean toward the over given the bats both of these teams deploy on a daily basis. While neither game yesterday was high scoring, those were 7 inning games. Also, the familiarity of both teams with the opposing pitcher this time around lends itself to more runs scored in the earlier parts of the game. With both teams pitching on limited bullpen support, a short outing for a starter could lead to be a disaster for the game.

I do not love this under, it’s not the great value bet that the Astros ML is.