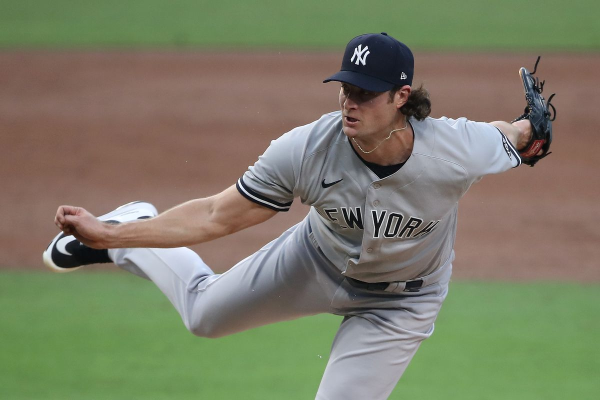 With the baseball playoffs underway, just one game remains in the divisional round. The New York Yankees and Tampa Bay Rays will go head-to-head one last time on Friday night for a date with the Astros in the ALCS.

Here is a preview for Game 5 between the Yankees and Rays, complete with a betting pick. FanDuel Sportsbook has New York as a decent favorite, listing them at -152 on the moneyline.

Using a total of four home runs, the Yankees powered their way to a 9-3 victory in Game 1. The biggest came in the ninth inning when Giancarlo Stanton blasted a grand slam that padded the lead for good. Gerrit Cole was also solid, allowing three runs in six innings with eight strikeouts.

Then on Tuesday night for Game 2, four Rays pitchers combined for 18 strikeouts as Tampa Bay evened up the series with a 7-5 win. Tyler Glasnow, who’s going up against Cole on Friday, led the way with 10 of those punch outs. Tampa also hit four homers, an early shot from Randy Arozarena and an insurance blast from Austin Meadows.

In Game 3, the Rays’ offense scored seven of their eight runs between innings four through six, leading them to an 8-4 win and a 2-1 series lead. Arozarena delivered once again with another homer and two additional base hits, while Joey Wendell also had a three-hit game. Charlie Morton was solid for Tampa Bay in five innings, while New York has just three at-bats with runners in scoring position.

Facing elimination, the Yankees held the Rays to just one run on three hits, winning 5-1 and evening up the series. The bullpen trio of Chad Green, Zack Britton, and Aroldis Chapman allowed just one baserunner in five dominant innings. The offense was punctuated by dingers from Gleyber Torres and Luke Voit.

Following a quality start in Game 1, Cole will be tasked with leading the Yankees to the ALCS. In the first year of his record-setting contract with New York, the ace went 7-3 with a 2.84 ERA and 94 strikeouts in 73 innings of work.

His other postseason start before this series came in the Wild Card round against Cleveland, where he went seven innings and allowed two runs. However, in three starts this year against Tampa Bay, he managed to go more than five innings just once.

Pitching against Toronto in the Wild Card round, the righty went six innings while striking out eight and allowing two runs. Glasnow has also made three starts against New York, including a six shutout inning performance and one where he failed to make it out of the third inning.

After another injury-filled regular season, Giancarlo Stanton has stepped up for the Bronx Bombers. Even though he didn’t homer in Game 4, he extended his extra-base hit streak to six, hitting at least one in each postseason game thus far. D.J. LeMahieu is also picking up where he left off in the regular season, riding a 12-game postseason hitting streak that dates back to last October.

Even after going 0-for-4 on Thursday, Randy Arozarena is still hitting .500 this postseason with three home runs. The young outfielder set a record for 25 total bases through the first five games of his team’s postseason, the most in MLB history.

A big x-factor for Tampa Bay could also be Brandon Lowe. Despite leading the club with 14 home runs in the regular season, Lowe is hitless in this series and 2-for-23 in the playoffs as a whole. A contribution from him could make a world of difference.

Two very different teams will be on the field tonight. The Yankees will live and die with their ace, while the Rays are likely to have a short leash with their starter before going to the bullpen. New York has a bevy of big bats, while Tampa Bay has many players the casual baseball fans are unfamiliar with.

Regardless, it all comes down to just one final game. And it’s hard to bet against the team with the better pitcher on the mound.

I see New York taking advantage of Tampa’s tired bullpen later in the game, while the hot hitters like Stanton and LeMahieu carry the offense. Give me the Yankees to win the series and move on to face Houston in a rematch of last year’s ALCS.