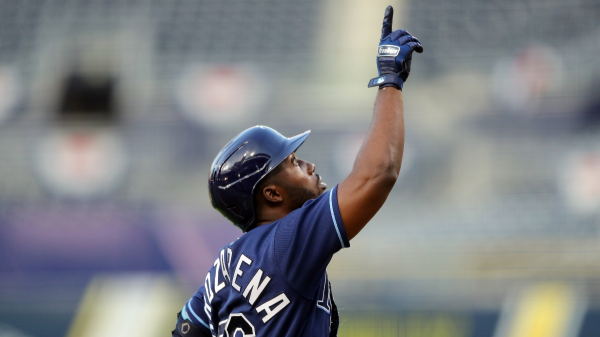 Even though the Rays hit the road for game three, they won for the second day in a row and now have a 2-1 lead in the series. That makes this upcoming the first elimination game of the series. Key to the win yesterday was a solid start by Charlie Morton and keeping the ball in the ballpark.

Giancarlo Stanton did go yard for the fourth time already in these playoffs, but it was the Rays who out-slugged the Yankees, winning the homer battle three to one. Tampa does not get a lot of pub for its hitting but OF Randy Arozarena is emerging. He his his third homer in the playoffs and is hitting .667 over the five games the Rays have played.

With the scheduling format for these series, both teams are being forced to dig deep into their pitching. They are playing for the fourth day in a row and New York is technically the home team, but it looks like the advantages are all to the Rays.

Ryan Thompson is a reliever by trade. He pitched earlier in the series, two shutout innings in Tampa’s loss in game one. Tampa frequently uses relievers as “starters” but that has not usually been his role. He has done so just once this season and it was against the Yankees, where he also pitched 2 scoreless innings. Tampa is loaded with strong relievers but they are still asking a rookie to be sharp in this situation.

The Yankees are going the more traditional route with lefty starter Jordan Montgomery. He made ten starts during the regular season but has yet to pitch in these playoffs. He has the stuff to strike batters out but his numbers have not been great – with a season ERA of 5.11. What also looms large is the fact that his only start against Tampa was his worst one of the season, as he didn’t even get out of the first inning.

Neither manager has to be loving the pitching situation, but given what it is, I am surprised that the odds are so close. They still have all the big names in their lineup but Tampa, with their diverse group of right-handed relievers, has been able to neutralize those threats enough to take the series lead. I think the easy call is Tampa Bay.

All three games of this series have seen exactly 12 runs scored, so it is no surprise to see the total sliding up closer to this number. Obviously if we get another 12 spot this will be an easy cash, but I think we see more modest scoring in this game. As we have seen throughout the regular season and playoffs, just because a game does not feature starting pitching does not mean it won’t be well pitched. New York is hoping that Montgomery can get the job done but facing elimination, they will have to apply a quick hook if he just doesn’t have it. I am confident Tampa will more than hold up their end of the bargain pitching wise, avoiding the big bats with men on base.