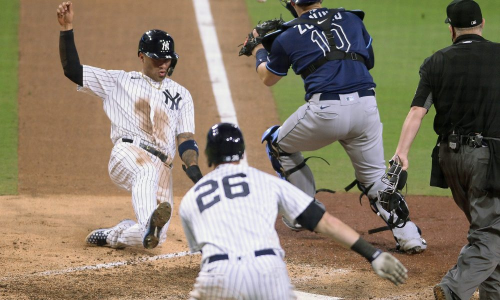 So far, this has not been a great series between Tampa Bay and New York, as the individual games have not been all that interesting. However, after yesterday’s results, it is the only MLB series yet to be determined. Here’s hoping these two teams finish with a flourish.

Yesterday the Yankees got a wonderful pitching performance from Jordan Montgomery and their elite bullpen trio. There is no need for Montgomery in this one, but if the Yankees have some tired arms that could be a factor. Tampa will hope to get its offense back on track against Yankees ace Gerrit Cole after putting up only one run yesterday. Cole and Rays starter Ty Glasnow are both going to be working on short rest, a significant factor.

Both of these starters have big arms that can blow away hitters, which we have seen in this series and throughout the season. They are totally different beyond that though.

Cole is an old fashioned ace, a bulldog who battles and can rear back and find something extra when he needs it. Given everything, the Yankees are hoping he can give them an all time performance and pitch deep into the game, because that’s what they are paying him for, right? Tampa has a different perspective with Glasnow. They never assume he is going to work deep into the game, and if he gives them 3 or 4 dominant innings they are cool with that and have things organized in support.

So which scenario is more likely? Will Cole dominate, get through seven innings and pass the game off to a couple of elite relievers who close the door, or will Glasnow put in his work, flame throwing for 3-5 innings and bridging to Tampa’s elite bullpen?

Both of the strategies have risk, but I am leaning Tampa here mainly because I think they will be shrewder if/when things are not working. My worry is that Cole might be pushed a little too hard. He is not going to implode, but an inning too long could be the ballgame. Both pitchers are in unfamiliar spots, and I trust Tampa to be more prepared for that comes next.

New York has the lineup advantage and it was nice to see Luke Voit hit a homer yesterday. This is a one game winner takes all though, and it is not like this Yankees group has done a ton of winning like in the Derek Jeter days. Aaron Judge has a career .227 average in the playoffs. This group just doesn’t have that guy that just “gets it done”. Tampa might not either, but they are not paying a premium for hitters.

The value with Tampa is too good to ignore

The last game of the series was the first under we have seen, with just six runs combined. This is a low total but you have to wonder about the handicap a little. How many combined innings are oddsmakers expecting from Glasnow and Cole? How will the bullpens hold up? I think the latter will do just fine, but I am willing to gamble on one of the starters not being super sharp and getting just enough runs to cash that over. 3-1 to the over in the series so far gives a little more confidence despite the reputation of the arms.