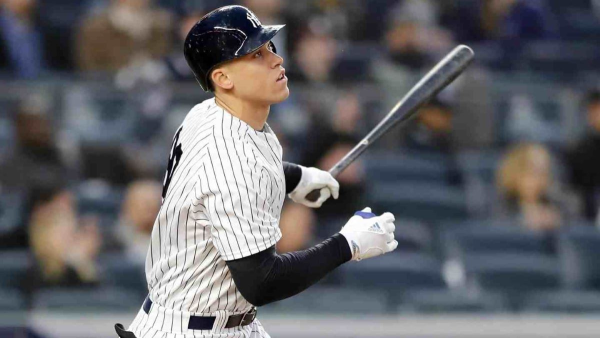 Baseball is back and, after an extended break, the Major League Baseball regular season is finally set to commence. With the season being whittled down to a 60-game sprint, every game is going to be crucial, and Opening Day takes a new meaning.

With so much excitement for baseball, MLB is giving us a really fun matchup right off the bat as the New York Yankees will travel to Nationals Park to take on the defending champion Washington Nationals on Thursday. First pitch is scheduled for 7:08 pm ET.

Of course, these two are coming off deep postseason runs. The Yankees fell at the hands of the Houston Astros in six games in the American League Championship Series.

For the Nationals, they were able to not only make it to the World Series but were crowned champions after beating the Astros in a seven-game classic.

Both of their roads to the postseason start on Thursday in what should be quite the pitcher’s duel. The Yankees will send out newly-acquired Gerrit Cole to face off with the Nationals’ Max Scherzer.

According to FanDuel.com, the moneyline for this matchup features the New York Yankees at -142 and the Washington Nationals at +120. The over/under on runs scored is set at 7.5.

Yankees Hoping Cole Is The Answer

After losing to the Houston Astros in last year’s playoffs, the Yankees were able to beat them in the offseason. New York signed the free agent Gerrit Cole to a massive nine-year, $324 million contract.

Despite his best efforts, Cole came up a bit short in the AL Cy Young voting as he was second behind teammate Justin Verlander. Still, his signing immediately boosted the Yankees’ rotation, and it helps make them the favorites to win the AL pennant this year.

Offensively, the Yankees will hope to get a full season out of outfielder Aaron Judge. Last season, in just 378 at-bats, Judge hit .272/.381/.540 with 27 home runs, 55 runs batted in and 75 runs scored. If he can stay healthy through a shortened season, Judge could certainly challenge Mike Trout for the AL MVP.

Another player to keep your eye on is Gleyber Torres. The 23-year-old hit a remarkable .278/.337/.535 with 38 home runs, 90 runs batted in and 96 runs scored and will be another vital part to a deep and vaunted Yankees’ lineup.

The Washington Nationals ended last year with a World Series championship, but they are going to have to get out of the blocks a lot faster this year. Last year, after just 50 games, the team was 19-31. If they start that way again this year, they won’t even make the playoffs.

For Thursday’s game, they will look to veteran ace Max Scherzer to get the season started right. Even though Stephen Strasburg was probably the better pitcher to end the season last year, Scherzer still has ace stuff. Last season, Scherzer went 11-7 with a 2.92 ERA, 1.03 WHIP and struck out 243 in 172.1 innings.

Offensively, the Nationals lost a big bat in third baseman Anthony Rendon, who signed with the Los Angeles Angels. Still, the Nationals have some thump in their lineup, especially outfielder Juan Soto.

Taking The Yankees On Opening Day

This is truly a game where either pitcher could take control of the game; however, I have a little more faith in the Yankees’ bullpen to hold onto that lead late. It also doesn’t help that Max Scherzer looked shaky at best in his lone preseason game against the Phillies on Saturday, giving up seven runs in two innings.

Even if Scherzer pitches like we know he can, I still think their offense can wear Scherzer down while Gerrit Cole will have his first opportunity to make good on his massive contract.

I wouldn’t blame you if you rolled the dice with the defending champions, but for my money, I am taking the Yankees at -142 straight up. It wouldn’t surprise me if this was a pitcher’s duel, though, so the Nationals +1.5 on the spread might not be a bad play either.